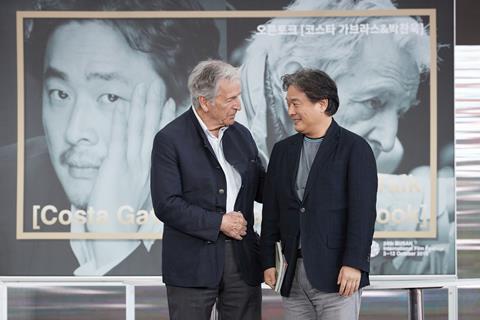 In a Filmmaker’s Talk today (Oct 6) at the Shinsegae Culture Hall, Park Chan-wook discussed the importance of humour in his films, getting advice from Philip Glass during Stoker and standing his ground in the edit suite.

The Seoul-born director, who established himself internationally with 2003’s Oldboy, began the conversation by dissecting key sequences from 2005’s Lady Vengeance and 2009 vampire horror Thirst, noting how important humour was in each of the narratives as well as throughout his career.

Park also discussed how he tries to create characters that are “crispy” on screen, and revealed that Philip Glass taught him a key lesson when they collaborated on the director’s first English-language project Stoker, when the perplexed UK composer – unsure what Park wanted with his piano composition ‘Duet’ – told the director to stop being so ambiguous with his comments.

“I was sweating and embarrassed about asking him to change [the music], but [after he said that] I was relieved – that’s why I gave him more pain after that,” the director smiled.

Park was also asked how he approaches situations where he finds himself in conflict with his producers, either during production or in the edit suite.

“Nobody can have it perfect in terms of having artistic freedom or final cut. Your previous film’s box office determines how much power you have on your next film. It’s possible [to have all the power] on an independent film but not on a commercial studio film.”

“You have to listen to other people’s opinions but there are instances when, in the end, you have to fight,” Park continued. “You have to say, ‘I’m quitting this film.’ But it can’t be a threat, it has to be real – you have to be willing to quit. You have to be ready to accept the loss of all your time and that your reputation in the industry will hit the floor, that you will be called stubborn and become infamous.”

Earlier in the day, Park shared the outdoor BIFF Theatre stage with Costa-Gavras, the two acclaimed directors sharing stories about their careers with the festival audience and each other. Park has long planned to remake the Greek-French filmmaker’s 2005 comedy drama The Axe, and reaffirmed his commitment to make it one day as an English-language project.