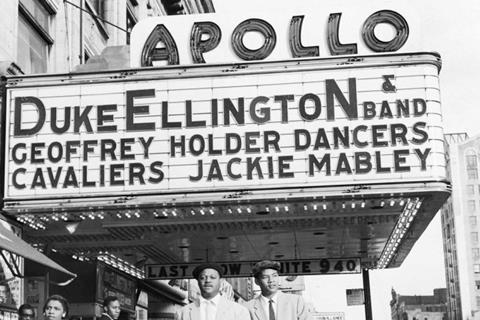 Williams and Cassidy Hartmann (The Beatles: Eight Days A Week, Mole Man) wrote the film, which is shooting now in New York and chronicles the history of the Harlem venue and its musical and cultural legacy and its place in the dialogue about race and social progress in the US since 1934.

The Apollo Theater Film Project will explore the celebrated music, dance, and comedy performances that have taken place there, and the institution of ‘Amateur Night’ – the precursor to talent competitions like American Idol and The Voice – which continue to run on Wednesday nights after more than 80 years.

“The Apollo’s contribution to American culture is immeasurable, and I am incredibly honored and excited to share its story with a global audience,” Williams said. “I hope this film will not only help to preserve the theater’s rich legacy, but also show how this treasured institution is nurturing the next generation of visionary artists.”

The film is presented by Impact Partners and the Apollo Theater, in association with Chicago Media Project, Polygram Entertainment, MACRO, Bert Marcus Productions, and Motto Pictures.

“We are so proud and fortunate to be working with Roger on this incredibly powerful story,” Sinclair said. “We are also so grateful to the whole team that’s helped bring this project to fruition for the Apollo. Special thanks to Dan Cogan for his indefatigable guidance and leadership on that journey.”