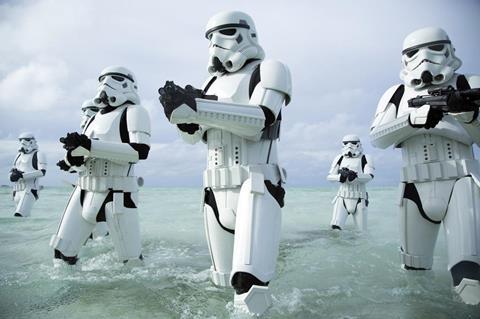 Rogue One: A Star Wars Story has crossed the $900m mark at the worldwide box office with a $78.6m global weekend seeing it reach $914.4m.

The Star Wars spin-off landed in its final overseas territory of China with an estimated three-day $31m chart-topping debut, which is around 61% of The Force Awakens’ two-day opening weekend.

Rogue One grossed an overall $56.6m from its 57 overseas territories for $437.1m to date, and continued to hold well in Europe and Latin America. It retained the top spot in the UK and France, among others.

The UK is currently its leading international territory with $73.7m.

With openings still to come in Japan and South Korea, Moana sailed to $20m from its 38 territories for $224.7m so far.

The animation charted second in Brazil with a strong $4.6m debut, marking the second-highest opening of all time for a Disney Animation or Pixar title behind Finding Dory. It lands in South Korea, Uruguay, Bolivia and Ecuador next weekend.

It fell only 18% in Germany with a $2m second weekend for $8.7m and recorded a $1.8m third weekend in France for $12.8m. The film arrives in seven new markets next weekend, including Sweden, Brazil and South Korea.

The sci-fi romance also opened in five Latin American markets for a total of $4.5m (the majority coming from $3.2m in Brazil) and landed in South Korea with a five-day debut of $3.5m from 550 screens.

Passengers lands in China next weekend and Japan on March 24.

Resident Evil: The Final Chapter retained top spot in Japan for the third straight week as it dropped only 8% for $2.4m and a terrific $27.3m. The film expands to the rest of the world from the end of January.

Illumination Entertainment and Universal’s latest hit animation opened well in Italy with a preview-boosted $4m, while it posted number one debuts in the likes of Argentina ($2m) and Poland ($1.5m).

Sing also took over at the top of the chart in Australia with a $2.5m second weekend for a local tally of $12.8m, and still had five major territories to open, starting with France on January 25.

Landing in France with $687k from 180 sites, Nocturnal Animals added $1.6m from its 30 territories for $15.4m. It opens in Belgium, Israel and South Korea next weekend.

UPDATE: Legendary and Universal’s The Great Wall sliced to a further $11.2m from its 20 territories for $182.6m to date.

Zhang Yimou’s epic action-fantasy, starring Matt Damon, landed top in Indonesia with an excellent $2m from 230 sites and also nabbed top spot in the likes of the UAE ($1.1m) and the Middle East ($924k).

It opens next weekend in France, Germany, Austria, Switzerland, Cyprus and Poland.

Some Like It Hot (Qing Sheng) added an estimated $11.3m from its two territories for $50.8m to date, according to comScore.

UPDATE: Collateral Beauty grossed $7.2m from its 47 territories for $30.4m ahead of its opening in Australia next weekend.

The Will Smith drama enjoyed an excellent opening in Italy with $3.6m from its 394 screens, charting fourth but recorded the best per-screen average of the top five films in the market.

With no new openings, Fantastic Beasts And Where To Find Them conjured up an additional $6.2m from its 53 territories for $567m to date.

The family outing enjoyed its best openings in Russia with $2.5m and Mexico with $1.2m, and arrives in Australia next weekend, followed by Germany on January 26 and Brazil on February 23.

Allied uncovered $3.4m from its 33 markets for $52.4m ahead of its openings in Italy, South Korea and Mexico next weekend.

The awards contender is now Lionsgate’s second highest-grossing film ever in South Korea with $19.5m after five weeks, and it opens in Germany, Russia, Spain, Finland and the UK next weekend.