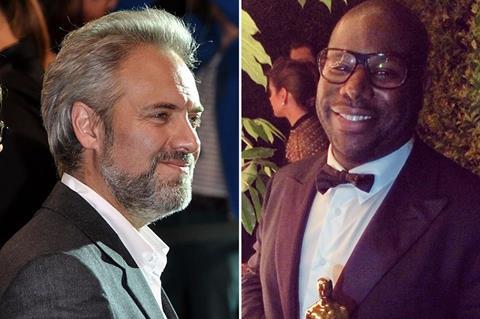 Sam Mendes, whose First World War thriller 1917 is gathering pace in awards season, is one of two Oscar-winning British filmmakers to receive a knighthood in the UK government’s 2020 New Year Honours list.

Mendes (pictured at left) receives his honour for services to drama. He began his career in theatre, where he won two Laurence Olivier Awards, and broke out in Hollywood when his 1999 feature directorial debut American Beauty won five Oscars including best director and best picture. His credits include the last two James Bond instalments Spectre and Skyfall, as well as Jarhead and Road To Perdition.

Turner Prize-winning artist turned filmmaker McQueen (pictured at right) shared the best picture Oscar for 12 Years A Slave in 2014 and is recognised for his services to art and film. McQueen has directed Shame, Hunger, and most recently Widows, and is currently filming the London-set TV series Small Axe for BBC and Amazon Studios.

Universal Filmed Entertainment Group chairman Donna Langley is made a Dame Commander of the Most Excellent Order of the British Empire on the diplomatic service roll call. Langley oversees a powerhouse stable at the Comcast-owned studio that includes Illumination Entertainment and DreamWorks Animation, the Fast And Furious and Jurassic franchises, and films from Jordan Peele and Jason Blum.

Honourees include Elton John, who is made Companion of Honour – a distinction that only 64 living people can hold at any one time – while singer and campaigner Olivia Newton-John becomes a dame.

Emmanuel Anyiam-Osigwe, founder of the British Urban Film Festival 14 years ago, is made an MBE for ‘services to the Black and minority ethnic film industry’.