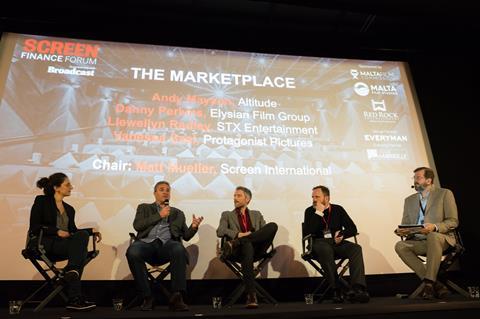 Four industry leading lights highlighted the polarisation of the UK film business at Screen International’s  UK Film Finance Forum in London today (December  5) – but identified the opportunites that are out there.

Danny Perkins, founder and CEO of Elysian Film Group, said: “There is a dichotomy of a production boom, all these things happening in the UK, but in terms of the independent sector there are real challenges and struggle.”

“But there are still massive opportunities and big audiences,” added the former Studiocanal UK CEO. “Everyone has a screen in their pocket and 5G is coming, which means everyone can consume more content than ever before. The market has become tougher but there are still results there.”

Llewellyn Radley, UK managing director and international EVP for STX Entertainment, agreed  the market is in a polarised state. “There are fewer and fewer films breaking out in that £3m to £8m box office space, which creates challenges,” he said. “You have to be more savvy and canny as to how you release films and budget P&A going into movies.”

“A lot of people think streamers are a bad thing but, actually, it’s quite positive,” said Andy Mayson, co-CEO at Altitude Film Entertainment, “They’re co-producing, fully financing movies… But we are in the middle of a very difficult time and there’s a lot of players in sales and distribution that are falling away from the market. But if you’ve got good content there’s always a way to get it made.”

Vanessa Saal, managing director of sales and distribution for Protagonist Pictures, admitted the talent drain was a challenge: “The question is whether the UK can figure out a way to retain a lot of [first-time filmmaker] talent and keep them doing films in the independent sector rather than Star Wars, Marvel or TV.”