Sticking to the script could be “death of documentary”, says Gianfranco Rosi 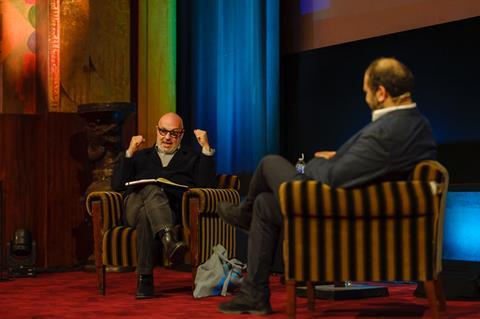 Golden Lion and Golden Bear-winning director Gianfranco Rosi has made an impassioned plea for creative freedom for documentary makers.

During his IDFA masterclass hosted by festival director Orwa Nyrabia, Rosi spoke of his “enormous hate” of commissioning editors who force documentary makers to stick by the script.

“We [documentary filmmakers] have to experiment constantly. We have to find a language, a challenge and [a way of] not repeating ourselves,” Rosi told Nyrabia. “That is what is fantastic about documentary – that you’re able to experiment and challenge yourself.

“[The commissioning editors] give you money for a script and then the film has to be that script. That is wrong. You start with a lie,” Rosi said.

Such a prescriptive approach, he continued, leads to the “death of documentary”.

In his own work, Rosi said he starts from an often tiny idea which will then grow and grow. “My films are never born with a table or a pen. My films are born with a very small idea and a big need. When I start any project, I never know where it goes.

“Making a film is about missing things”

During his 30-year career, Rosi has completed only six feature documnetaries. With some of his films, for example Boatman in 1993, about a boatman on the bank of the Ganges, his first film after leaving New York University’s film school, Rosi spent “years without watching the footage” before finally beginning to edit.

Once that film was completed, he waited almost a decade before embarking on his second feature documentary.

Rosi talked at length about his work on 2013 Golden Lion winner Sacro GRA. The film, which took two years to shoot and months more to edit, explores life around the Grande Raccordo Anulare, the huge ring road which encircles Rome.

“When you leave Rome, you have to pass through this ring which is like a ring of Saturn,” he said. “This ring divides the city in two parts.”

When Rosi began work on the documentary, he had only recently separated from his wife. “This is the hell of Rome,” he said of the ring road. “It’s a place where everybody gets lost; you never take the right exit. For two years, I always took the wrong exit to look for a story and then I found another story. I was alone. This was a film I did completely on my own. I was living in a camper. It was a very painful moment in my life.”

Asked about the precious material he often has to cut out of his films during post-production, Rosi shared an anecdote about the late Bernardo Bertolucci.

“Making a film for me is about missing things. It is not about gaining things. Then, there’s one moment you grab and that moment is worth everything. When I did Fire At Sea, Bertolucci, who two years before gave me the Golden Lion for Sacro GRA, wanted to see the film. [Afterward] he told me something very important. He said, ‘Do you know what is the strength of this film? You are able to see things you don’t film or show us.’”

A good film, Rosi added, will always suggest to the audience elements beyond what is on screen. “You have 80 hours of footage and the film is only two hours… the rest is there. It is part of the film.”

Rosi was asked by Nyrabia what advice he would give young filmmakers on how to keep their creative freedom. “I would say that your first or second film, you have do on your own completely,” the director said.

Early in his own career, Rosi worked in many different jobs, for example as a cameraman or in dubbing, in order to finance his work. “I never asked for money at the beginning… I didn’t deserve that money because I didn’t know which film I was going to do.”

Rosi was speaking following the Dutch premiere of his latest film, Notturno, which made its world premiere at Venice in September. It is sold by The Match Factory.

The film was shot over the last three years along the borders of Iraq, Kurdistan, Syria and Lebanon, with Rosi exploring the daily life behind the continuous upheaval of Middle Eastern war, dictatorship, foreign invasion and terrorism. Nyrabia was one of the producers on the project.