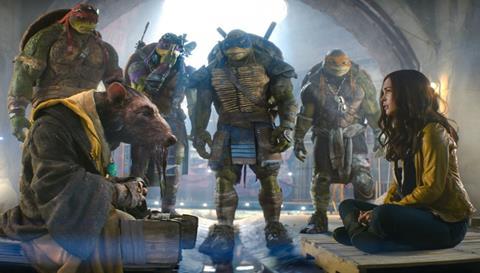 Having taken a slice of the UK box office action last weekend, Teenage Mutant Ninja Turtles has debuted top of the chart.

Teenage Mutant Ninja Turtles has already outgrossed the 2007 animated reboot TMNT ($4.7m/£2.9m), and its opening bodes well for the film during the upcoming school holidays with little direct competition.

It may have been prevented from a third week at the top of the chart, but Gone Girl can be more than satisfied with an excellent holdover as it dropped just 23% to add $3.8m (£2.4m).

First up for Gone Girl though will be to become David Fincher’s best-ever UK performer, currently Seven’s $31.5m (£19.5m).

Belying the usual fast-burn nature of horrors, Annabelle enjoyed an excellent second weekend of $2.36m (£1.47m). Warner Bros’ prequel is now up to $7.4m (£4.6m) and, despite the arrival of direct competition in the lead up to Halloween, could still enjoy a fruitful couple of weeks.

Undoubtedly one of the success stories of the weekend, Munro Films’ Northern Soul recorded a terrific non-final UK bow of $461,000 (£285,563) from its 88 sites to see it chart tenth.

The weekend saw a high proportion of sold-out shows to go with the film’s strong advance sales, leading to cinemas moving the film to bigger screens and adding extra shows to cater for demand. It resulted in the highest three-day opening weekend gross for a British film opening in under 100 sites.

It’s all the more impressive when you consider that Northern Soul is available on DVD/BR from today [Oct 20].

Screening in cinematheques and non-traditional venues worldwide, it is approaching $200,000 (£125,000) worldwide, with a few hundred venues still to come.

This week sees saturation releases for Sony’s LFF closer Fury (opens Oct 22), Lionsgate’s Love, Rosie (opens Oct 22), Fox’s The Book of Life and Warner Bros’ This Is Where I Leave You, as Disney’s Alexander and the Terrible, Horrible, No Good, Very Bad Day expands nationwide.

Icon’s The Babadook, Bull Dog Film Distributors’ Night Train to Lisbon and StudioCanal’s Serena all receive wide releases, while Peccadillo’s The Way He Looks and Metrodome’s Bogowie are among the films receiving a limited release.