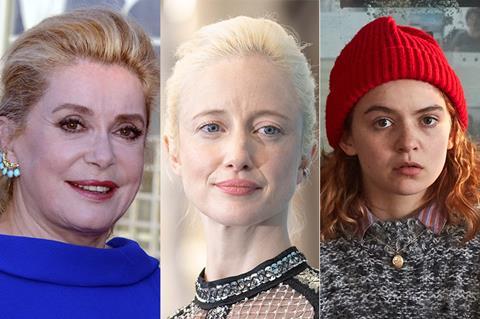 Catherine Deneuve, Andrea Riseborough and Morgan Saylor are set to star as three generations of women from the same family.

Thrown together under tragic circumstances, the trio are forced to learn to live together on a small rural chicken farm in New Jersey which generates moving and amusing situations.

It is the second feature from LA-based Ladoul and La Via after Anywhere With You (aka We The Coyotes), co-starring Saylor opposite McCaul Lombardi as a twentysomething couple who leave their native Illinois in search of a new life in Los Angeles. It world premiered in Cannes parallel section Acid in 2018 before hitting the North American festival circuit.

Martin Scorsese is executive producer on the new feature. which begins shooting on September 19, 2022, in the US and Belgium. French producer Julien Madon lead produces with partners Aimée Buidine, Melita Toscan du Plantier and Raphaël Gindre.

The feature is co-produced and distributed by Newen Connect - TF1 Studio, the distribution subsidiary of parent group Newen Studios.

“We were all moved by the intergenerational story of Funny Birds. Catherine Deneuve will shine as a free-spirited, independent woman who comes back into her daughter and granddaughter’s life, while they’re opposed in so many ways,” said Sabine Chemaly, EVP international distribution films Newen Connect - TF1 Studio.