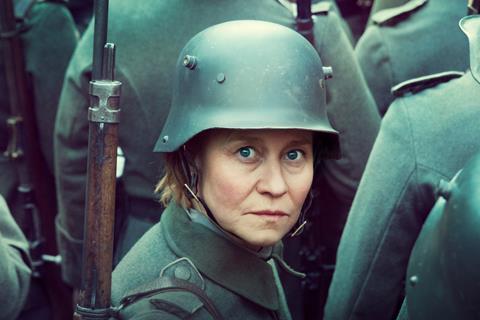 Top Danish actress Trine Dyrholm (Queen Of Hearts) stars as a mother whose mentally-challenged son is drafted into the army and sent to fight on the border between Denmark and Germany. In a bid to keep him safe, she disguises herself as a man, enrols and heads to the frontline.

The sales arm of French commercial TV giant TF1 is showing first images for the film which is in post-production.

“We launched it literally on the eve of the market and it’s been really well-received so far in this atypical market,” commented TF1 Studio sales chief Sabine Chemaly.

It shot in Denmark, Belgium and Estonia from late August 2019. Bo Hr. Hansen and Henrik Ruben Genz wrote the script based on Erling Jepsen’s novel of the same title.

Other titles on the TF1 Studio slate include Spanish heist drama Way Down and Noémie Saglio’s romantic comedy The ABCs Of Love, which is market premiering in the online market.