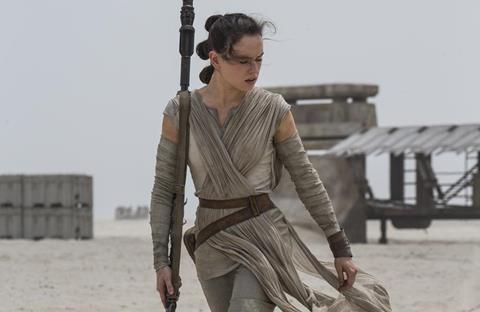 Having become the biggest film ever in the UK on Friday [Jan 8], Star Wars: The Force Awakens continued its domination of the UK box office over the weekend.

The Force Awakens became the second consecutive film to record four weeks as the UK’s number one, following The Hunger Games: Mockingjay - Part 2. It faces stiff competition for the top spot this coming weekend with the arrival of The Revenant.

Now, the only question is just how far The Force Awakens can go. The last seven days has seen it add more than £10m, so £120m looks a distinct possibility barring a steep drop.

Dilwale has now amassed $3.3m (£2.29m) after four weeks in play and is now the fifth highest-grossing Bollywood title of all time in the UK.

Despite not showing in three UK chains, Entertainment’s The Hateful Eight got off to a strong start at the UK box office.

Quentin Tarantino’s eighth feature recorded a confirmed $4.05m (£2.78m) from its 401 sites to chart second with a $10,097 (£6,935) site average, second only to The Force Awakens. That’s just behind Django Unchained and ahead of Kill Bill: Vol. 2, as well as the first weekend of nationwide release Kill Bill: Vol. 1.

It’s a notable result given the omission from three key chains, its 18 certificate and three-hour running time, which will have resulted in it getting fewer showtimes each day.

Paramount’s comedy is now up to a strong $17.3m (£11.85m) and has proven to be savvy counter-programming against Star Wars and awards contenders. It should hit a minimum of £15m, despite mixed reviews.

Aided by its BAFTA recognition, Universal’s The Danish Girl overtook Joy at the UK box office with a $1.9m (£1.29m) second weekend.

Tom Hooper’s biopic is now up to a ten-day tally of $5.5m (£3.79m) and while it won’t reach the heights of The King’s Speech or Les Misérables, the holdover is encouraging for Universal that it can enjoy a long run.

Including a live Q&A from Bertha DocHouse at 91 sites, Altitude’s Bolshoi Babylon recorded a UK debut of $52,000 (£35,341) from its nine sites over the weekend.

This week sees saturation releases for Fox’s The Revenant and Warner Bros’ Creed.

StudioCanal’s Room receives a wide release, while Soda Pictures’ Breakdown and Signature Entertainment’s Dragon Blade are among the films receiving a limited release.