Disney’s long-awaited return of the space saga posts second biggest opening of all time and the biggest Fri-Sun weekend of all time. 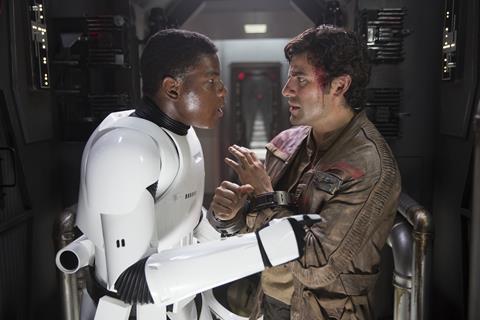 Having posted the biggest ever day at the UK box office on Thursday, Star Wars: The Force Awakens recorded the second biggest opening of all time and the biggest-ever Fri-Sun tally.

And having taken Harry Potter And The Deathly Hallows: Part 2’s record of biggest day ever, The Force Awakens has now overtaken that film’s biggest-ever Fri-Sun tally of $35.38m (£23.75m) with a stunning haul of $36.06m (£24.2m) over Fri-Sun. It’s all the more impressive given how big the film’s Thursday was.

Second to Spectre, but three of the biggest days ever

The Force Awakens did, however, fall short of the all-time record opening achieved by Spectre of $61.5m (£41.3m), but that did come from seven days. Officially, The Force Awakens will rank as the second biggest opening ever, but will likely still make more across its first seven days than Spectre.

This year has seen four of the widest releases ever at the UK box office. Starting with Jurassic World’s 605, Inside Out then broke the record with 608 before Spectre released on 651 sites.

On the Digital Cinema Media estate which includes Cineworld, Vue, Odeon and Picturehouse, The Force Awakens has delivered 2.7 million admissions to date according to DCM’s head of film Tom Linay.

The Phantom Menace’s $84m (£56.41m), which includes its 3D re-release, will also soon be overtaken as the highest-grossing Star Wars outing in the UK.

According to the inflation adjusted totals in the latest BFI Statistical Yearbook, The Phantom Menace took $115.6m (£77.6m) and A New Hope took $112.8m (£75.7m). The Force Awakens won’t have any trouble surpassing both.

Really, the main target for The Force Awakens is Skyfall’s all-time record of $153.3m (£102.88m) as the UK’s highest grossing film. And given its huge opening, Bond will soon be feeling the power of the Force.

Disney also had success this weekend through its UTV distributor as Dilwale posted a superb debut of $1.08m (£725,000) from just 140 sites. In terms of Bollywood outings in the UK, that ranks as the seventh biggest opening of all time.

It will need to rebound over Christmas to overtake Avatar’s $140.1m (£94m). It currently stands as the third-biggest film of all time in the UK.

It has at least won the battle of this year’s Christmas-themed films over Krampus and The Night Before, perhaps unsurprising given its family-friendly certificate.

Carol has hit the £2m mark at the UK box office after four weeks in play.

With most cinemas shut on Christmas Day, Warner Bros’ In the Heart of the Sea and Paramount’s Daddy’s Home receive a saturation release from Saturday [Dec 26].