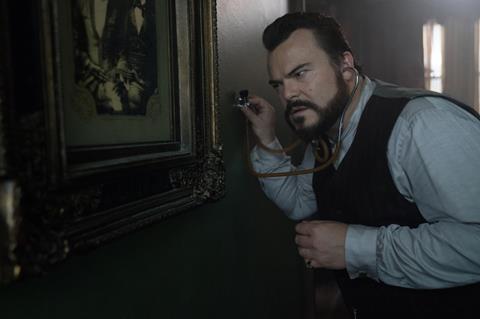 The House With A Clock In Its Walls

The House With A Clock In Its Walls, the family feature starring Jack Black and Cate Blanchett in the story of a young orphan who has a magical uncle, topped the pile this weekend with a Fri-Sun result of £2.3m from 539 sites.  The film has now grossed £3.4m, taking in previews from last week.

Eli Roth directed the feature, a change of pace for a filmmaker who has largely plied his trade in the horror and action genres with titles such as Death Wish and Hostel. The latter was the last time one of his films opened to £1m+ in the UK, starting on £1.2m and ending on £4.2m in 2006.

The House With A Clock In Its Walls was adapted from the 1973 novel of the same name by John Bellairs and was produced by Dreamworks with Amblin and Mythology Entertainment.

Paul Feig’s mystery thriller  A Simple Favour, starring Anna Kendrick and Blake Lively, opened to £1.6m from 480 sites, an average of £3,378. That figure includes £303,434 of previews and Fri-Sun takings of £1.3m. The film is the story of a woman who tries to uncover the truth behind her best friend and is based on Darcey Bell’s novel of the same name,

Hatton Garden heist drama King Of Thieves held well in its second weekend, dropping 27% with £1.1m taking it to £3.7m so far.

The Little Stranger, which Fox is releasing in the UK on behalf of Pathe, opened to £294,900 from 296 sites, an average of just under £1,000. That’s behind the pace of director Lenny Abrahamson’s previous outing, the Oscar-winning Room, which opened to £674,033 and topped out at £4.1m. The Little Stranger stars Domhnall Gleeson as a doctor who visits a crumbling manor where eerie things are beginning to occur.

Black 47 (released with Irish outfit Wildcard) continues to perform strongly in the Irish market, dropping to number two in the local chart (only behind The House With A Clock In Its Walls) after adding £159,028 for £1.1m to date. The film is turning into a serious local hit after posting the biggest domestic opening weekend for an Irish movie since Brooklyn, and the first to pass €1m box office since The Young Offenders.

The Rider, directed by Chloe Zhao, who was recently announced as the director of Marvel movie The Eternals, added £9,104 for £69,391.

On limited showings, the film managed to be the highest-grossing film in multiple sites in London and Birmingham, and also performed well in Reading, Sheffield, Manchester and Bradford. For the release, Vertigo focused on a grassroots digital marketing campaign that targeted youth audiences.

The Intent 2 is the follow-up to Femi Oyeniran and Kalvadour Peterson’s The Intent, which attracted a cult following in 2016. The second film, which is directed by Oyeniran with Nicky Slimting Walker, is a prequel and follows a man whose allegiance to his crew and crime boss cripples his dreams and ambitions.

For comparison, Kidulthood, which targeted a similar youth and urban demographic, opened to £100,056 back in 2006. Its sequels Adulthood and Brotherhood both cracked the £1m mark once the franchise was more established.

Vertigo said it was hugely encouraged by the result and is looking to expand this weekend into further sites and venues.

Cold War posted a strong weekend and is now looking likely to be the first arthouse foreign-language film to cross £1m in the UK this year. The film added £70,545 Fri-Sun and is up to a running total of £894,660.

Matangi / Maya / M.I.A, Stephen Loveridge’s feature documentary about rapper M.I.A. which premiered at Sundance this year, where it won the Special Jury Prize in the World Cinema Documentary strand, got underway with £35,463 from 39 screens over the weekend. With previews, the film’s official opening is £43,130.

Hindi drama Batti Gul Meter Chalu, starring Shahid Kapoor and Shraddha Kapoor, opened to £58,507 from 53 locations, while Hindi romance Manmarziyaan is up to £94,629 after adding £7,377 this weekend.

Gaspar Noe’s Climax, which premiered at Directors’ Fortnight at Cannes in May this year, opened in 30 UK screens this weekend with a three-day figure of £21,445. With previews of £8,371, the official opening is £29,816.

Francis Ford Coppola’s mafia classic The Godfather was back in nine sites this weekend, taking £16,590.