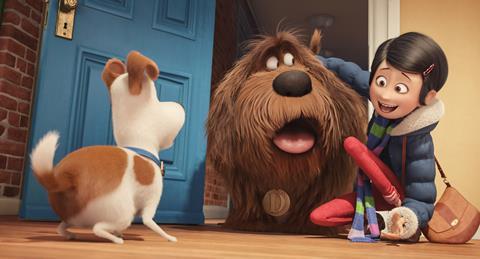 The Russian debut marked the biggest opening weekend ever (excluding previews) for an original animated film, while the film also made waves in Poland and Latvia with the year’s biggest opening in the market with $965k and $224k, respectively.

Illumination Entertainment’s The Secret Life Of Pets has ten more territories to open, starting with Brazil, Indonesia and the Philippines next weekend.

Jason Bourne powered to an extra $11.2m from its 61 territories for $137.9m internationally, with France the top holdover at $2.2m for $6.6m after 12 days in play. It opens in China and Mexico next weekend.

Blumhouse Productions and Platinum Dunes’ The Purge: Election Year grossed $1.7m from its 18 territories for $23.3m. The threequel charted third in Mexico with the series’ best opening of $1.5m, and lands in the UK next weekend.

Kubo And The Two Strings, from Laika Entertainment, opened in eight territories for a $957k debut, more than half of which came from its $519k bow in Australia. It opens next weekend in Bolivia, Cyprus, Ecuador, Malaysia, the Netherlands, Peru and Spain.

Central Intelligence now stands at $83.2m ahead of its final four releases next weekend: Belgium, France, French-Switzerland and Venezuela.

UPDATE: In its third weekend of release, Suicide Squad crossed the $300m mark at the international box office with $40.3m from its 64 markets for $313m so far.

The DC Entertainment adaptation opened in Germany with a chart-topping $6.9m and a 50% market share of the top five films, while its leading holdover came in Brazil as it retained the top spot with $3.5m for $28.3m.

New Line’s horror also opened in Spain with $1.1m to chart second and posted a $888k bow in Brazil from 269 screens, achieving the highest admissions per screen average of the top five films. It opens in France and South Korea next weekend.

Starting its international rollout in 31 markets, War Dogs shot to $6.6m from 2,661 screens. Russia led the way with $1.9m and Australia provided $1.1m, ahead of its release in the UK next weekend.

In its second weekend, Media Asia’s police thriller Line Walker grossed an estimated $16.5m from its six territories for $71.5m to date, according to ComScore.

The latest mission for the USS Enterprise crew also landed in France with $2.1m from 603 sites and Spain with $978k from 407 sites.

Paramount-MGM’s remake charted top in four markets, including Mexico with $2.7m, while it recorded a $2.2m bow in Brazil and $992k in Venezuela. It opens in Australia, Argentina and the Netherlands next weekend.

In its second weekend, Showbox’s The Tunnel travelled to an estimated $9.6m for $37m to date, according to ComScore.

Mexico led the holdovers with $1.1m for $5m after two weeks in play, while it posted second weekends of $765k and $415k in France and Spain, respectively, for $2.8m and $2.2m. Paul Feig’s reboot opens in South Korea next weekend.

Its top new openings came in France with $1.5m from 268 screens and Australia with $1.3m from 227 screens. Ahead of its debuts in Brazil, Germany and Italy, the single-location thriller added $530k in the UK for a local tally of $2.3m.

Sausage Party held well with a $2.1m second overseas weekend from its 13 markets for an early $6m. Australia fell only 27% on its way to a $1.4m second weekend for $4m to date.

Pete’s Dragon flew to a $5.7m second overseas weekend from its 17 territories for $14.2m to date.

The remake opened with $1.8m and more than 240k admissions in France, while it delivered strong holds in the UK (down only 1% for $3.1m to date) and Italy (down 17% for $2.8m). It lands in seven new territories next weekend, including Germany.

Partying to $713k in France from 197 screens, Mike And Dave Need Wedding Dates added $2.4m from its 30 markets for an early $18.8m. The R-rated comedy opens in Argentina and Norway next weekend.

Absolutely Fabulous: The Movie grossed $1.1m from its six markets, including a $140k opening in Finland, to lift its overseas tally to $29.2m.

With a soft $70k debut in Sweden, Nerve added $1.3m from its 29 markets for an early $6.8m, ahead of it landing in France, Brazil and Denmark next weekend.