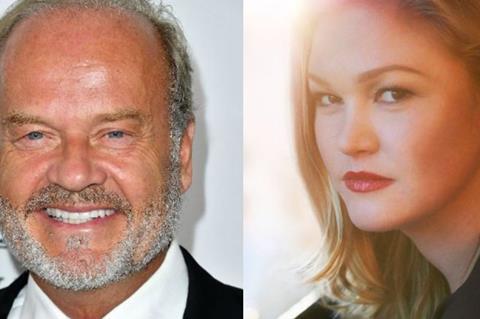 Filming is underway in New York on the story set against the backdrop of the US organ transplant system and takes place across two timelines. In one, a transplant committee has one hour to decide which patient deserves a donor heart that is being flown to a New York hospital. The other takes place six years later and explores the impact of that decision.

Colman Domingo, Janeane Garofalo and Dan Hedaya round out the key cast, and Austin Stark directs from his screenplay. Molly Conners, Amanda Bowers, Vincent Morano and Jane Oster are producing for Phiphen alongside Ari Pinchot and Jonathan Rubenstein for Crystal City, and Stark, Benji Kohn, and Bingo Gubelmann for Paper Street.

“The worldwide organ shortage continues to devastate families from all walks of life,” said Stark. “I feel honored to be working with such an incredible ensemble – anchored by Kelsey, Julia, Colman, Janeane and Dan – in my quest to humanize the transplant system and bring faces to the statistics.”

Grammer most recently starred opposite Kristen Bell in Netflix’s Like Father. Stiles stars in Hustlers opposite Jennifer Lopez and Cardi B.

Stark made his writing and directorial debut on political drama The Runner starring Nicolas Cage, Sarah Paulson and Peter Fonda. His producer credits include Infinitely Polar Bear, Detachment, and Happythankyoumoreplease.