Toronto: Bleecker Street acquires 'Eye In The Sky' for US 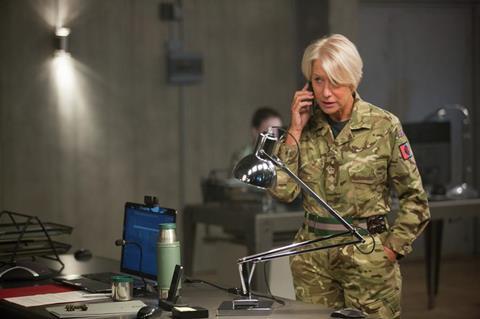 Bleecker Street has acquired US rights to Gavin Hood’s drone thriller Eye In The Sky from Entertainment One (eOne) in a deal believed to be worth $2m-$3m.

The film, which received its world premiere at the Toronto International Film Festival on Thursday (Sept 10), will be made available online through Amazon Prime following its theatrical run as part of Bleecker Street’s deal with Amazon Studios.

Eye In The Sky stars Helen Mirren as Colonel Katherine Powell, a UK-based military officer, who is remotely commanding a top secret drone operation to capture terrorists in Kenya.  The mission quickly escalates when news of a deadly suicide mission spreads and US pilot Steve Watts, played by Breaking Bad star Aaron Paul, is conflicted when a nine-year old girl walks into the kill zone.

Producers are Colin Firth and Ged Doherty’s Raindog Films and eOne, which also handles international sales and will directly distribute the film in Canada, the UK, Spain, Benelux and Australia/New Zealand. David Lancaster also serves as a producer on the film.

In a joint statement, Firth and Doherty said: “After the incredible audience and industry reactions to the Toronto premiere, we are delighted to be partnering with Bleecker for the US release.”

Bleecker Street CEO Andrew Karpen said: “When I saw this film in Toronto, I knew we had to have it.  The tension created within each scene by Gavin Hood and the stellar performances by Helen Mirren and Aaron Paul was so palpable, that I was on gripped by every moment of the movie.”