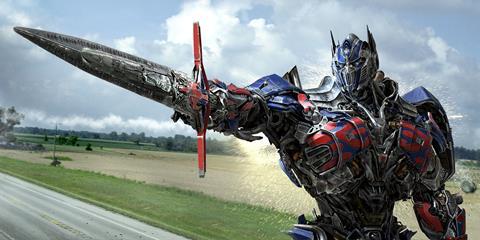 As expected, Transformers: Age of Extinction has recorded the year’s biggest opening to date as it exploded into life at the UK box office.

The debut also marks the biggest opening of the Transformers series to date, surpassing Transformers: Dark of the Moon’s $18.4m (£10.7m) which included $7.2m (£4.23m) in previews.

If we consider this Fri-Sun to be its first ‘weekend’ though, Age of Extinction’s $6.3m (£3.7m) gross is actually the lowest of the franchise.

Dark of the Moon is currently the highest grossing Transformers outing in the UK at $48.1m (£28.11m), and the arrival of Dawn of the Planet of the Apes will provide stiff blockbuster competition for Transformers: Age of Extinction this coming weekend in its attempt to overtake that result.

Expanding nationwide after two weeks of release in Scotland and Ireland, How to Train Your Dragon 2 climbed up to second with a $13.3m (£7.8m) weekend, including $8.3m (£4.9m) from its England and Wales previews over the past month.

That marks director Richard Linklater’s second highest opening in the UK, behind School of Rock’s $4.6m (£2.7m) debut from a considerably wider release (377). Linklater’s acclaimed Before trilogy all missed the £1m mark in the UK, a target that looks the minimum aim for Boyhood.

It is, however, director John Carney’s best-ever UK debut by some distance and it will shortly overtake Once’s $1.2m (£682,000) UK result.

This week sees saturation releases for Fox’s Dawn of the Planet of the Apes (opens July 17) and Vertigo’s Pudsey the Dog: the Movie (opens today in Ireland and Scotland).

Soda’s Finding Vivian Maier, Peccadillo’s I Am Divine and StudioCanal’s Grand Central are among the films receiving a limited release.