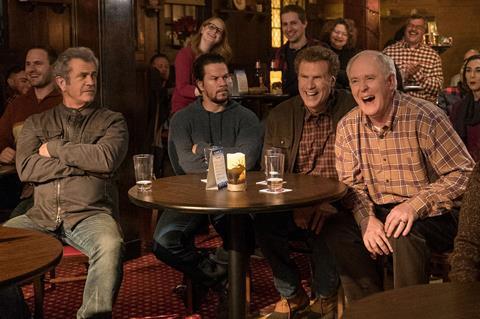 *including grosses from 2013 release

That’s an improvement on previous entry Daddy’s Home, which opened to $2.18m (£1.63m) from 438 sites, albeit from only a two-day opening stretch over the 2015 Christmas weekend.

The first film marked director Sean Anders’ biggest UK bow, so the sequel tops that, and it will now be eyeing up the final gross of $22.97m (£17.2m) posted by the original.

Paddington 2 held second place in the chart, posting another strong hold in its third weekend with a non-final $5.97m (£4.47m), a fall of 32%. The family-friendly hit is continuing to track significantly ahead of the original, which posted a third weekend of $3.87m (£2.9m) back in December 2014.

That puts it on $39.13m (£29.3m), making it officially the seventh highest-grossing Marvel film in the UK having surpassed Guardians Of The Galaxy. It looks set to cross £30m this week, becoming the eighth UK release to do so in 2017.

Also from Disney, a re-release of popular animation Frozen, accompanied by new featurette Olaf’s Frozen Adventure, took $1.47m (£1.1m) over the weekend, largely from early matinees on Saturday and Sunday.

Lionsgate’s Julia Roberts and Jacob Tremblay-starring Wonder has a saturation release this weekend.

The Man Who Invented Christmas, via Trafalgar Releasing, will have a wide release.

There will be limited releases for Michael Haneke’s Happy End via Curzon Artificial Eye, and Most Beautiful Island via Bulldog Film Distribution.