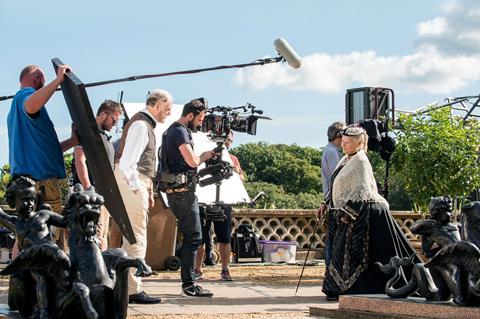 Behind-the-scenes on ‘Victoria And Abdul’, which shot predominantly in the UK.

A proposal to the UK government for a guarantee it will help cover any costs for UK film and TV projects incurred due to coronavirus-induced suspension or abandonment has been “well-received” by the UK government, according to John McVay, CEO of producers’ organisation Pact, and the head of the taskforce which submitted the proposal.

The proposal was submitted to the DCMS at the end of last week by a group including Pact, the UK’s major broadcasters, Directors UK and insurance and legal experts. They believe the plan will help get UK film and TV production back up-and-running quickly while longer-term insurance issues are resolved.

“In the absence of full insurance cover, we’re looking for government to create a guarantee that would help get film and TV back into work,” said McVay

“It’s not such an issue for production from big studios – they tend to self-insure anyway. But for domestic production, none of us can really get back to work if we think we’re going to get another suspension or lockdown coming along.”

The size of the fund could range from £80m-£200m, depending on the volume and value of shows in production at the time it was required.

Under the proposals, the industry and government would split any costs caused by a blanket ban on production. The safety net is not intended for cases when specific productions are forced to shut down due to an individual falling ill.

A blueprint for TV production was unveiled on May 18, while guidelines for film and high-end TV are expected in the coming days. McVay said while the industry has “moved fast” on creating health and safety protocols, insurance is the “number one” issue that will facilitate the restart.

“We developed a proposal at speed after wide-ranging consultation across the industry, including all the broadcasters,” he explained. “We presented a robust, very durable proposal to government, because we’re seeing other territories coming up with their own schemes, in France, or Australia or elsewhere. We’re the world’s second most important audiovisual economy; we want to get back there.”

“We know our proposals have been well-received, and we’ll be pressing to engage with government on that.”

The UK government gave the go-ahead for film and TV production to take place within social distancing guidelines on May 12. However, McVay said very few of Pact’s members have been able to get back to work.

“No-one is back working how things were described as ‘working’ prior to this’,” he said. “Clearly any big dramas that require big crowd scenes are not starting back any time soon.”

Keeping operations running at all is the major concern from Pact members right now, according to McVay.

“Everyone’s concerned about surviving; most British companies don’t have huge reserves, so even with furloughing, companies are burning through their capital,” he said. “Ultimately that may lead to some failures, I don’t know how many and I don’t know where or who. People have been working very hard to find out how to use the current rules and adapt them so they can make things. But it’s not like it’s a big car factory that you just switch on again. It’ll take a while for things to get back, and it’ll be slow.”