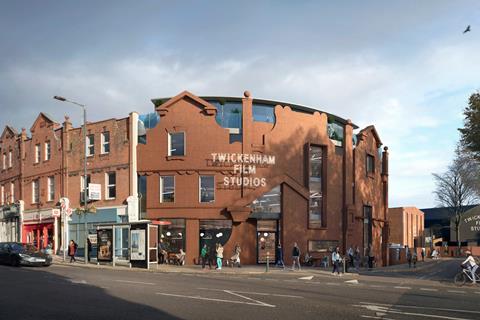 UK film and TV production site Twickenham Film Studios has had planning consent approved for an expansion of its campus in south-west London, with building work now underway.

Currently sitting at 105,000 sq ft, Richmond Council’s Planning Committee has approved an extension of 19,000 sq ft. The development aims to provide 60 new jobs post-completion, in addition to the 1000 people already employed, and a spending uplift to the local economy of £2.5m per annum.

The plans involve a hybrid of film studios and production facilities with enhanced public areas, co-working spaces for local businesses, a café and a boutique cinema.

Twickenham Film Studios said in a statement: “Sustainability will also play a pivotal role in the work, with initiatives that enhance site’s biodiversity, urban greening and reduce carbon emissions through the use of on-site renewables.”

The project has been led by Piers Read and Jeremy Rainbird’s studio building firm The Creative District Improvement Co (TCDI CO), with investment from General Projects and the British Airways Pension Fund. The aim is to create 5,000 jobs and one million square feet of production space in the UK by 2024, with studios planned for Liverpool, Ashford, Birmingham.

Twickenham Film Studios is operated by Time+Space Studios, a subsidiary of TCDI CO.

Twickenham Film Studios is London’s oldest film studio, established in 1913. Films produced at the studios include The Italian Job, Bohemian Rhapsody and 1917.