Distributor becomes the first to record the first, second and third chart positions, as Minions holds off Ted 2. 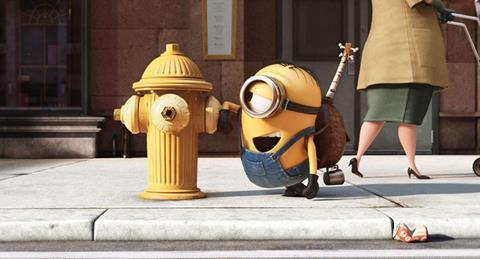 Not content with its films setting records, Universal has become the first ever distributor to achieve a 1-2-3 treble at the top of the UK box office.

It is now tracking ahead of Despicable Me 2, which stood at $42.1m (£27.1m) at the same stage and with extra days due to previews.

It also means that Minions is now the year’s biggest animation, topping Fox’s Home, and it has a further week to prosper before the arrival of Disney’s Inside Out on July 24.

It will shortly become the tenth biggest film of all time, currently The Lord of the Rings: The Two Towers with $89.6m (£57.6m).

Realistically, its only potential target is Terminator Salvation’s $22.1m (£14.2m) result, but even that is likely to prove a step too far.

It will need a sturdy hold and healthy midweek numbers to have a hope of challenging Magic Mike’s $13.1m (£8.4m) tally.

Amy will become the sixth biggest non-concert documentary of all time tonight, overtaking TT3D’s $2.1m (£1.34m), and it should be challenging Bowling for Columbine’s $2.6m (£1.67m) as the fifth biggest by the end of this week.

This would also see it break into the top ten documentaries of all time.

With a handful of shows across its eight sites, New Wave Films’ P’Tit Quinquin took $3,600 (£2,322) on its UK debut, marking the second best opening for director Bruno Dumont behind Hors Satan.

Warner Bros’ The Gallows receives a wide release, while Curzon Film World’s Salt of the Earth, Soda Pictures’ The Wonders and StudioCanal’s 13 Minutes are among the films receiving a limited release.