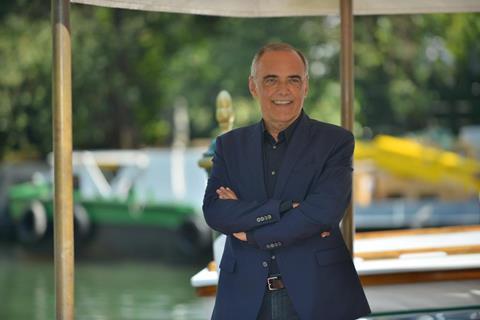 The film went on to win the Golden Lion and is now an awards season favourite, picking up its first set of critics prizes on Nov 29, when it swept the board at the New York Critics Circle awards.

French film industry heavyweight Seydoux suggested in an interview with Screen film festivals should not select features that are not guaranteed a proper theatrical release, and went so far as to suggest that Barbera should not have selected ROMA.

He said ROMA is “not a film” because Netflix was not planning a wide theatrical release for the film, favouring instead a digital launch on its platform.

The French film industry veteran was speaking on the fringes of the Cairo International Film Festival (CIFF), where both he and Barbera gave masterclasses this week.

Venice’s Barbera initially responded with a hasty tweet to Seydoux’s comments, writing in French that his suggestion that Roma was “not a film” was “une vraie betise”, which translates roughly as “nonsense”.

Later, in a midnight interview with Screen on the closing night of CIFF, a cooler Barbera backed away from polemics and gave a more level-headed response to Seydoux’s comments.

We saw your tweet today in which you say Seydoux’s comments are “une vraie betise”. What do you mean by that?

[Laughs] I shouldn’t have written that tweet, because I don’t like the idea of getting into polemics. Really, I have a great respect for monsieur Seydoux, who is a wonderful man and is a gentleman. We spent a lot of time together here in Cairo. We had a nice conversation about this problem and so on, and I respect his point of view. Of course, I understand, pretty well, but of course I don’t agree with him.

I attended the masterclass that he did, which was fantastic. I agree with 90 per cent of what he said about the history of cinema and the transformation of cinema and the problems that cinema has had to confront over the last century and so on, and the actual situation.

But I think he is making a mistake when he says that what he sees as the definition of film, is defined by something that has to go to the theatre. I don’t agree with that. I think that the mistake is that there is a shift from the product itself to the medium that conveys the product. You cannot define the specificity of a film by the medium.

A film is a film. ROMA is a film because it is a film. It’s made by a real filmmaker: a big auteur. It’s very innovative, it was made on digital with a new technique, 65 frames per second, the visuals of the film is absolutely amazing, the mise-en-scene is something that was so rare to see and to watch on the screen and this is the essence of cinema and so I cannot agree that this is not a film because it is not going to a theatre.

Don’t you think he was trying to defend cinema?

This is cinema as we have been used to experiencing it our entire life, but we have to face the fact that something is happening, that this is a revolution. The digital revolution is a revolution that is going to change everything, especially in the way of distributing films. I think that theatres will remain, they will not disappear at all, but the two systems will stay together, the streaming and the traditional cinema.

Nicolas Seydoux suggests that failing to defend the theatrical window in the face of rising competition from the streaming platforms will lead to a decrease in theatrical audiences, as was the case when television arrived. Do you agree?

Yes, that could be possible of course. It happened in the past with television and it is probably the case of today, of nowadays, there is nothing we can do about that, we have to accept this. We have to accept the fact that the viewer will from now on be able to choose between two different options, going out from his own apartment and going to a theatre and watching a movie in the best possible way, or staying at home and watching the film on a TV set, which is bigger than it was before and better sound and so on.

We cannot stop this development but this will not, I don’t think, change the essence of cinema. The cinema will still be there. We will lose something. We will lose the possibility to share the emotions with other viewers at the same time but we will gain something, we will gain the chance, the opportunity to see, at any moment, because it’s available on streaming, anywhere we are.

We said the same thing when the VHS and the DVD appeared, 30 or 40 years ago, they said VHS would kill cinema. It didn’t happen. It gave the opportunity for everybody to see films again, which you couldn’t see because they were not available in any theatre. So, they increased the possibility to watch a movie. I’m pretty sure, that was is going on today, of course, the numbers of spectators in theatres are decreasing, almost everywhere, apart from Russia or China or something and a few countries, but the trend is there, the figures are that it is decreasing.

But I’m convinced that there are more and more viewers for cinemas on different situations, theatres, streaming, web and whatever and there will be more and more because they are multiplying the offer, which will multiply the viewer.

Is this the thinking behind your festival’s Venice Sala Web platform, allowing spectators to watch films at home as they premiere at the festival?

It’s a way to promote films that have small chances to get theatrical distribution. I like the idea that everything is available now on internet. If you are looking for a film, 95% you can get it somewhere on the web or on streaming and so why not, it’s fantastic, it’s a wonderful opportunity. I don’t think that Netflix is an enemy for cinema, it’s another player in the film industry and it doesn’t make any sense to fight against Netflix.