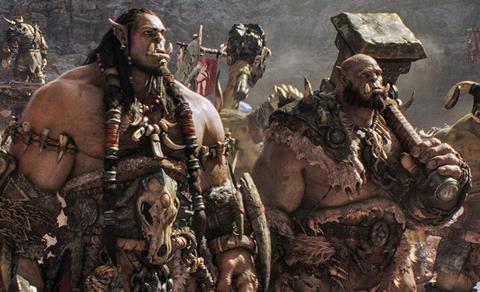 UPDATE: Thanks to its staggering Chinese debut, Warcraft led the international box office with an estimated $185.9m weekend in its 52 territories.

Legendary-Universal’s video game adaptation marched into China with a record-breaking five-day opening of $156.1m, including the best ever IMAX weekend with $20m from 292 screens at a huge $68k per screen that broke several daily IMAX records.

Overall, the film now stands at $304.5m as of Monday [June 13]. Dalian Wanda-owned Legendary is distributing Warcraft in China.

Central Intelligence opens in 22 international territories, including Germany and Sweden, next weekend alongside its North American release.

UPDATE: The Conjuring 2 scared up a terrific $51.5m on its overseas bow in 44 markets.

Recording the biggest opening weekend ever for a horror film in 30 markets, the New Line sequel is expected to be the number one film internationally outside of China.

The Conjuring 2 creeps into Germany, Russia, the UK and Spain next weekend, followed by Italy on June 23 and France on June 29.

Ahead of its openings in Australia and Brazil next weekend, Me Before You grossed $5.4m from its 17 markets for $18.8m to date overseas.

UPDATE: X-Men: Apocalypse enjoyed a $24.4m weekend from its 80 markets for $341.5m to date, ahead of its Japanese release in August.

In its final international market, Deadpool fell only 36% in Japan with a $2.3m second weekend for a local tally of $11.4m. Overseas, it now stands at a terrific $414.2m.

UPDATE: Following its Australian debut last weekend, Summit Entertainment’s Now You See Me 2 uncovered a $21.2m from its 30 markets for an early $23.9m.

It opens next weekend in Sweden, Denmark and Norway, among others.

With no new markets opening, Alice Through The Looking Glass sailed to a further estimated $14.6m from its 44 territories for $151m to date.

China continues to be the sequel’s strongest market with $55.7m, with much of Asia, including Japan (July 1) and South Korea (Sept 8), still to release.

The Jungle Book has swung past the $900m mark at the global box office, making it the third biggest release of 2016 in North America, the international arena and worldwide.

Set to take the number one spot in South Korea with a $5.9m debut, the live-action adaptation added an overall estimated $7.5m from its 30 territories for $557.2m overseas and a global haul of $909.8m.

The sequel lands in Brazil, South Korea, Spain and the Netherlands, among others, next weekend.

The Angry Birds Movie has flown past the $200m mark internationally with an estimated $10.4m weekend from its 87 markets for $213.9m to date.

Falling 46% in its fourth weekend, the animation added $2.3m in China for $72m, which makes it the fourth highest grossing animated US film of all time in the market.

The Angry Birds Movie catapults into Italy next weekend.

Australia led the holdovers with a fall of 33% for a $1.1m second weekend and $3.3m to date, while Germany posted a $450k third weekend for $2.8m to date. It opens in Mexico next weekend.

Park Chan-Wook’s Cannes title The Handmaiden recorded an estimated $4.8m second weekend in South Korea for $22m to date, according to ComScore.

Currently playing in 22 territories, The Nice Guys shot to a further estimated $3m for $17m overseas to date, according to ComScore.