What a Joe Biden administration could mean for Hollywood 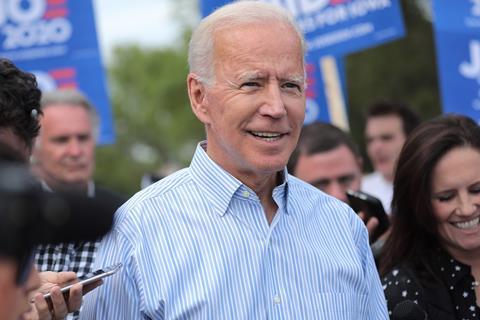 Now that Joe Biden has been sworn in as the 46th president of the United States, his administration is expected to lend a relatively sympathetic ear to the concerns of the US film and TV industry.

But Hollywood will not necessarily get its way on all the issues. With traditionally Hollywood-friendly Democrats in the White House, “there are issues that will be resolved differently and conversations that may or may not be more comfortable,” Jean Prewitt, president and CEO of the Independent Film & Television Alliance (IFTA), told Screen recently.

“But our industry employs people in every state in the country, both red and blue,” Prewitt added. “It’s not a one-party industry.”

The most pressing concern for the industry is “getting a handle on the virus,” said a leading Hollywood PR executive. “That’s the key to both the industry’s own activities and to people being able to consume content outside their homes, which is paramount to all of us.”

Biden is expected to be more proactive than his predecessor on that front. Prior to taking office he announced plans for a $1.9bn stimulus package. US cinema operators, for one group, “cannot wait” for more assistance to their stricken businesses, according to the National Association of Theatre Owners.

Biden’s political track record may provide clues to how his administration will handle longer term issues relevant to the industry. Also crucial will be the new president’s ability to appoint majorities at government agencies such as the Federal Trade Commission and the Federal Communications Commission (FCC).

The office of the US Trade Representative will take the lead on talks on the US-China film agreement, and Biden’s transition team included an executive from the Directors Guild of America (DGA).

The agreement was negotiated in 2012 by Biden as Barack Obama’s vice president, and Xi Jinping, who was China’s vice president at the time. However its implementation was interrupted by the Trump administration’s trade war with China.

Now, said IFTA’s Prewitt, “we would like to see that picked up again.”

Piracy is another area Biden dealt with as Obama’s second in command, and a DGA spokesperson said his administration and Congress “must address the rampant illegal and unlicensed exploitation of our films and TV programmes on the internet”.

On the issue of net neutrality, some industry interests are hoping that a Democratic-majority FCC might reinstate the 2015 Open Internet order that was repealed by the then Republican-majority agency in 2017.

Most US film and TV tax incentives are state-based and beyond the control of the federal government, but industry watchers suggest that if a stimulus bill provides broad financial aid for pandemic-hit states it could indirectly help those states maintain their incentive programmes.

Areas in which Biden administration policies might not favour Hollywood studios include antitrust and media consolidation – mega mergers along the lines of Disney-Fox and AT&T-Warner could face more scrutiny from now on – and corporate taxation.

Biden’s campaign plan called for the corporate income tax rate, reduced to 21% under Trump, to increase to 28%, and for a minimum levy on companies’ foreign earnings.

Increasing diversity in the film and TV industry is an area that could be a focus for Harris, who at Wednesday’s (January 20) inauguration became the first female and the first African American and South Asian to hold the office of vice president.

Harris, born in California and a former US Senator for the state, could prove to be an invaluable Washington contact for Hollywood.

Though Biden has not tapped into the ‘Hollywood ATM’ as much as previous Democratic candidates like Barack Obama and Hillary Clinton, Harris has received fund-raising support from industry names such as Watchmen creator Damon Lindelof and Universal film group chairman Donna Langley.

The Hollywood unions have shown their support of Biden and vice president Kamala Harris. The Writers Guild East and West chapters both tweeted messages of support, as did IATSE, International Brotherhood of Teamsters, and Actors’ Equity, among others.

SAG-AFTRA tweeted, ”Congratulations to @JoeBiden on being sworn in as @POTUS and to @KamalaHarris on her historic inauguration as @VP. #InauguarationDay.