Why Venice is embracing the VR sector 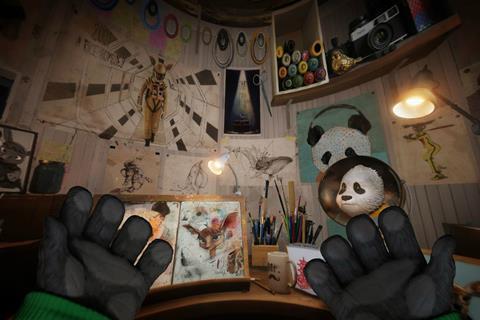 ‘Glimpse’ features the voices of Taron Egerton as a heartbroken panda and Lucy Boynton as the deer from whom he has just broken up.

Virtual Reality is taking hold on the Lido as Venice, the only A-list festival which has its own VR competition, ramps up its VR offerings yet further.

“[VR] is a new form of storytelling and art and it needs to be recognised in the same way that film is recognised,” said Liz Rosenthal, co-programmer of Venice VR alongside Michel Reilhac.

The Venice competition is divided into two strands. Linear and Interactive. There is also an Out of Competition/Best Of VR section.

“What we felt was that VR was being treated as a tech innovation. The way it is written about and exhibited is always in tech terms,” Rosenthal commented. “We thought, wow, there is such an opportunity to exhibit and celebrate a new art form.”

The Venice Virtual Reality section, set up in 2017, is now a fully integrated part of the festival. It has its own lavishly equipped premises on Lazzaretto Vecchio, an island 50 yards off the Lido. Winners of its competition strand are given full Venice Lions.

As in feature films, VR projects are increasingly being sold on the back of the talent involved in them. Several Venice VR projects have stars involved. Oscar-winning UK writer-director Benjamin Cleary and VR creator Michael O’Connor’s new interactive animated VR project, Glimpse, is voiced by Rocketman’s Taron Egerton (playing a heartbroken panda) and Lucy Boynton (Bohemian Rhapsody) as the deer he has just broken up from. Boynton is due on the Lido later in the week to support the filmmakers. Gloomy Eyes is narrated by Colin Farrell while Rosario Dawson stars in animated 70s punk project Battlescar – Punk Was Invented By Girls, which is screening in Venice’s Linear VR competition.

Another of Venice’s Interactive VR competition titles, Gabo Arora’s These Sleepless Nights, inspired by the Pulitzer Prize-winning book, Evicted, has music by Philip Glass, a composer who has scored many feature films.

Artist and filmmaker Laurie Anderson is presenting her new VR project, To The Moon, made in collaboration with Hsin-Chien Huang and sold internationally by Codex Management. Anderson is also president of the VR jury.

Two UK interactive titles in competition are generating interest. Dr Who The Edge Of Time immerses viewers in the world of Daleks and Tardises, and has been launched to tie in with the new Dr Who series on the BBC. Producer/distributor Vertigo Films  has Britannia VR: Out Of Your Mind, which is directed by Kim-Leigh Pontin. The  interactive project was commissioned to support the release of Sky Atlantic’s second series of Britannia, starring Mackenzie Crook.

As Rosenthal points out, more and more of the major players attending Venice VR, among them the Facebook-owned Oculus and the Taiwan-based global electronics company HTC Vive, do not just manufacture headsets and hardware – they are also developing, financing and selling projects through their content divisions.

Several VR projects in Venice including Qiu Yang’s O, Midi Z’s The Making Of, and Inori were financed by HTC Vive. 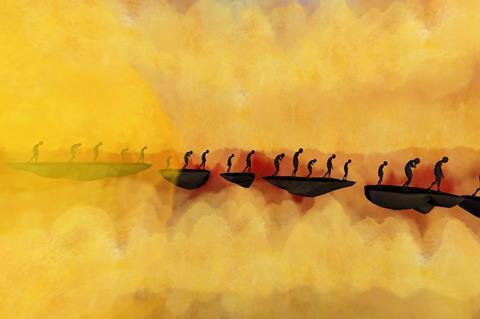 Oculus is also financing VR content and was the backer of Celine Tricart’s Venice VR competition contender, the social impact project The Key, which was financed through Oculus division, VR for Good. Meanwhile, US company Magic Leap, whose selling point is blending visual and digital worlds, backed Venice Best OF VR title, Tonandi.

Rosenthal confirmed several national film agencies will be visiting VR Island, among them the BFI and the CNC. On Sunday, Reilhac is moderating a special discussion with leading European critics (including Screen’s Jonathan Romney) on “How to start building a critical system to approach the new language of immersive storytelling.” This is part of a bid to nurture critical thinking about VR and to encourage reviewers to engage with individual VR works in the same they would with movies in the festival.

After Venice, Rosenthal is executive producing the new Arts Council England-backed VR market, CreativeXR Showcase and Market, which will be held on October 9-10 during the BFI London Film Festival at the Digital Catapult offices in Euston.