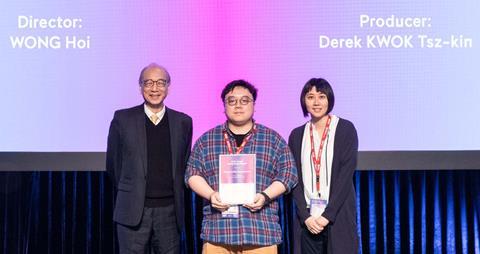 Each project received a cash prize of $19,200 (HK$150,000) in recognition of their originality and creativity.

This year, HAF added a WIP Documentary Award, for a documentary presented as a Work-in-Progress project, which went to Japan’s Odoriko. The award came with a cash prize of $10,000 (HK$78,000).

HAF showcased 42 projects in total, including 19 Work-in-Progress (WIP) projects. In total, the financing forum handed out 18 awards worth a combined $270,000 ($2.1m) in cash and value-in-kind (see full list below).

“Thanks to the generous support from our partners, sponsors and fellow filmmakers, both the number and total value of this year’s awards have set new records, affording more resources and opportunities for filmmakers to realise their dreams,” said HAF director Jacob Wong.

A Story Of HERS (China)

Who Is Sleeping On My Pillow? (China)

The River In Me (China)

Circa (The Philippines) from HAF

The Shepherdess And The Seven Songs (India) from WIP

On High Ice (Israel and South Korea) from WIP

The Priest In The Village (China)

The Grandstand (The Philippines)