The Hungarian-born socialite and celebrity has died at her Bel Air home after reportedly suffering a heart attack. She was 99. 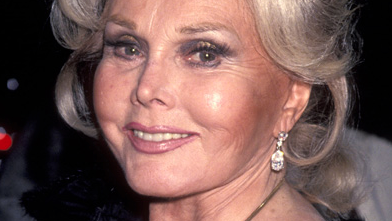 Gabor was born Sari Gabor in Budapest in February 1917. She won the Miss Hungary beauty pageant at the age of  19 and took off to find fame and fortune in Hollywood.

She found it, appearing without much acclaim in dozens of films such as her 1952 debut Lovely To Look At, Moulin Rouge and Orson Welles’s Touch Of Evil.

There were a few stage roles and there were frequent tongue-in-cheek television appearances as herself, by which time Gabor had recognised that her wit and glamour would become her legacy.

In one of many witticisms, she declared, “I am a marvellous housekeeper. Every time I leave a man, I keep the house.”

She was renowned for frequent and heavily accented pronunciation of the word “darling” and offered this explanation for that term of endearment: “I call everyone ‘darling’ because I can’t remember their names.”

Gabor married nine times. Ex-husbands included hotel mogul Conrad Hilton, with whom she had her only child, Francesca Hilton, who died in 2015.

Fittingly Gabor’s great niece is Paris Hilton, who inherited among other things Gabor’s ability to promote herself as famous for being famous.

There was brief notoriety in 1989 after she slapped an arresting police officer following a driving violation that resulted in an out-of-court settlement two years later.

Gabor’s health declined sharply after a car accident in 2002. Her left leg was amputated below the knee five years ago following an infection and she spent the last years of her life confined to her Bel Air home.

She is survived by her husband Prince Frederic von Anhalt.