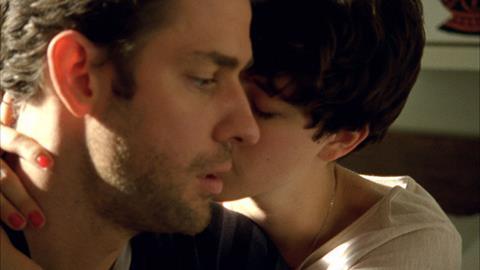 Human nature—its sexual impulses, specifically—go under the microscope in Ry Russo-Young’s uneven third feature film. Working with a bigger-name cast (Olivia Thirlby, Rosemary DeWitt, John Krasinski) and on a more subtler canvas than in her previous low-budget efforts Orphans and You Won’t Miss Me, Young tells a somewhat conventional story about an outsider who enters a family unit, destabilizing everyone in her wake.

While Russo-Young might be applauded for a more mature, restrained approach in telling this story, it also lacks fizzle.

While the film’s licentious-sounding subject matter could spark some international sales, Nobody Walks is ultimately a modest art-house film, more suited to smaller screens. Thirlby plays Martine, a 23-year-old New York artist, who arrives in Los Angeles to stay in the pool house of a family friend, Julie (DeWitt), where she plans to complete the sound on an experimental film with the help of Julie’s husband Peter (Krasinski), who works as a professional sound designer.

Meanwhile, Peter and Julie’s 16-year-old daughter Kolt is head over heels for Peter’s handsome assistant David, seen early on stripping off his shirt, revealing his ripped chest, and diving into the family pool to unclog a drain.

Such sexual tensions underline just about every human interaction in the movie. Early on, when Peter and Martine are recording ambient sounds for her art project—a black-and-white avant-garde loop, dominated by images of ants and other insects—there’s a well-played scene in which Peter asks Martine to lie down, close her eyes, and try to guess the sounds he’s getting from his directional microphone. If the mic isn’t intended to be a phallic symbol, it sure seems like it when Peter puts it close to her slightly open mouth, picking up her slow breaths.

While Russo-Young might be applauded for a more mature, restrained approach in telling this story, it also lacks fizzle. For a film about libidos, it might have been a little more libidinous, either in tone or style, both of which are fairly muted. (There is but one boldly edited scene, which cleverly intercuts sex inside a soundproof room with shots and noises from the world outside.)

To be sure, the movie isn’t just about carnal instincts. It’s also about Peter and Julie and Martine. Both DeWitt’s even-keeled therapist wife and Krasinski’s naïve husband experience notably resonant emotional arcs. And both actors do an excellent job of subtly conveying their characters’ moral confusion. But Thirlby’s Martine is more of an enigma, seemingly untouched and blasé about what she has wrought on the family. Perhaps that’s the point. And her vagueness as a character is a result of the fact that she doesn’t yet know who she is either. But if Nobody Walks is also her story, viewers might appreciate getting to know her a little better.