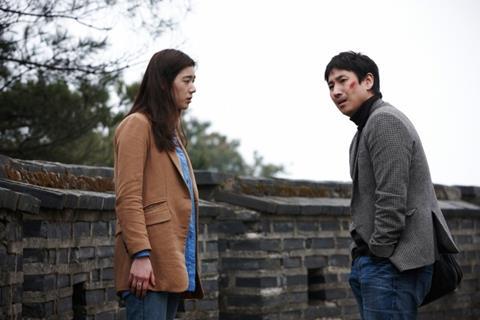 The New Wave is still alive and kicking in Korea. Or so it seems, judging by Hong Sangsoo’s latest contribution, yet another of his tributes to the kind of films the French were making 50 years ago. For all of its 90 minutes, Nobody’s Daughter Haewon talks a love affair between a film student and her professor to death, or so it seems, and the whole thing could have gone on for hours more without offering its two protagonists a way out of the vicious circle of emotional confusion in which they seem to be locked. Since Hong’s reputation is safely established, festivals and art houses might still welcome his new film.

Hong’s cast enters into the spirit of the venture, with Jung Eunchae just right as Haewon, a pert look in her eye, testing her wings for her first solo flights as her own woman.

Predictably enough, most of Hong’s characters are related one way or another, to the movies. Cutely handsome film student Haewon (Jung Eunchae), whose mother moves to Canada in the opening sequence, is badly in need of moral support and calls in her former lover, a married film director teaching cinema at the college, Seongjun (Lee Sunkyun). With him, she will meet, dine and drink profusely with some of her colleagues, who do not seem to like her overmuch, they will walk, talk, argue and fight at length in and out of Seoul’s West Village and the nearby historic site of Fort Namhan, separating several times, with the older man in tears every time it happens.

On her own, she will walk around, meet and occasionally flirt with strangers, such as Jungwon (Kim Euisung), who claims to be a film professor in US and a friend of Martin Scorsese. She is fascinated by books and often stops to browse but never to buy them, she writes everything in her diary and then reads the entries out loud in voice-over narration. She is the prototype for a modern, sensitive, attractive but rather confused young woman looking, not very energetically, for a scope that she evidently lacks.

A kind of instantaneous snapshot of a society in movement and the changing shape of the relations between men and women, Hong’s film doesn’t go very far or very deep in its observations. It is more like eavesdropping on conversations, pointing out little incongruities here and there and leaving the characters pretty much at the same point it picked them up.

Taking place in early spring, still chilly and grey enough to spread the same kind of mood on the proceedings, inserting in the script a few notes on generational conflicts and following it all with a fluid camera which seems to attach itself effortlessly to the protagonists without ever cornering them or imposing itself on their action, the picture looks like a rather inconsequent but pleasant lightweight romp leading nowhere in particular.

Luckily, Hong’s cast enters into the spirit of the venture, with Jung Eunchae just right as Haewon, a pert look in her eye, testing her wings for her first solo flights as her own woman and telling a story that some may suspect is partly fabricated in her dreams, for she is often seen falling asleep next to her diary. Not that it matters, for dreams are also part of the overall experience she is about to acquire for herself.

The grating element in the other smooth talkathon is the choice of the musical love theme that happens to be an atrocious synthesiser version of Beethoven’s 7th symphony. Anyone with the least bit of sympathy for music will jump out of his seat.