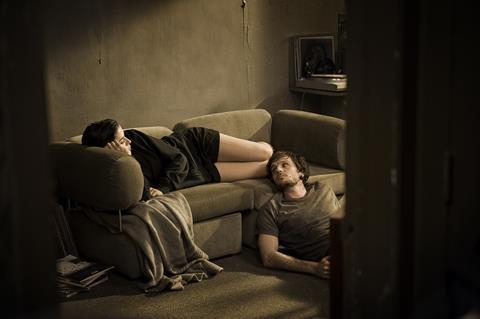 A one night stand turns into a night full of anguished conversation in Nuit #1, an intriguing but frustrating feature debut by Montreal-based Anne Émond. Although capably performed by lead actors Catherine De Léan and Dimitri Storoge, this small-scale two-hander ultimately fails to deliver on its ambitious aims.

Clara and Nikolai trade monologues, reveal secrets, occasionally clash with each other and eventually move towards some kind of mutual understanding.

The work opens with languorous, slow-motion shots of sweaty bodies dancing at a rave, before cutting to a couple bursting through the door of an apartment. Bodies entwined, they start pulling off each other’s clothes, but the man — in a gesture later revealed to be fully in character — pauses long enough to ask the woman’s name. She is Clara, he (she already knows) is Nikolai.

After a realistically-shot and quite explicit sex scene brings the viewer to the 20 minute mark, Nikolai falls asleep, and Clara leisurely glances through the apartment and prepares to go out. However, waking up at the sound of the door, Nikolai calls her back from the stairway and launches into a frustrated speech (indeed, almost a lecture) on the banality of modern lovemaking.

Thus begins the long central passage of Nuit #1, in which Clara and Nikolai trade monologues, reveal secrets, occasionally clash with each other and eventually move towards some kind of mutual understanding.

Rarely venturing outside of Nikolai’s dimly-lit apartment, the film gives everything over to the frank conversation between the two artistically-inclined and alienated lead characters. Yet instead of capturing the emotional bond developing between the two, the film focuses more on the bold manner in which they confess their darker secrets to each other. In this way, what we witness feels more like an overheard conversation at the psychiatrist’s office than the first night of an emotionally meaningful relationship.

The fact that the two main characters speak in broadly similar voices adds to the repetitive tone that gradually engulfs the work. The film screened in the Love/Romance section of the Busan International Film Festival.