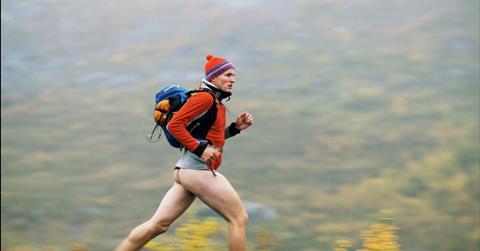 A Walter Mitty-esque comedy drama set against the stunning backdrop of the Norwegian great outdoors, Out Of Nature (Mot naturen) is an engaging delve into one man’s troubled sub-conscious as he tries to tackle the issues – mainly sexually orientated – haunting his life.

The clever balance co-directors Ole Giæver and Marte Vold achieve is to make Martin a rather endearing character despite his lusty longings.

Notable thanks to a rather distinctive naked jogging scene, the film has a dry wit to balance its off-beat story, with co-director Ole Giæver also going in front of the camera and impressive as protagonist Martin (that self-same naked runner) who carries pretty much the entire storyline. It is a physically demanding role – with most of the dialogue interior – that he handles pretty impressively.

Mild-mannered Martin (Giæver) is a put-upon worker who is ill at ease with his co-workers, unhappy with his wife and young son and imagines sexual relationship with other women. He also imagines making love with his wife, but given they barely have any form of communication, that seems highly unlikely to him.

In a bid for some sort of spiritual renewal – or at least escape from his monotonous life – he tells his wife he is going off for a run in the nearby mountains, planning to commune with nature and sleep there for a couple of nights. In his own mind he is a dynamic individual, attractive to women and a powerhouse at work, but alone in the mountains reality clashes with his imagination.

An ‘accident’ while sleeping rough (which harks back to bet-wetting memories as a child) sees him disrobe and run bottomless for a while and while masturbating behind a tree he is almost caught by a fellow rambler. But really hits home in an unexpected way when he finds two young women sleeping overnight in the same hikers hut where he plans to stay. Against all of the odds, one of them takes a shine to him and they are set for a sexual liaison, before his imagination kicks in and he finds himself unable to respond to this long-held fantasy.

At heart Martin is simply a rather childlike and selfish man who has yet to get to grips with the realities of his life and it takes the tangible possibility of acting through with his fantasies to spur him to return home with a slightly different mindset. The clever balance co-directors Ole Giæver and Marte Vold achieve is to make Martin a rather endearing character despite his lusty longings, with his demanding – yet also rather clumsy – run through the mountains offering up an engaging series problems and opportunities. Martin may escape the worries of society for a while but he still carries a certain amount of angst with him.