Palm Dog ready for its closeup

Handicapping the 2014 Palm Dog race; as well as previewing a new feature film that uses the Palm Dog as a backdrop. 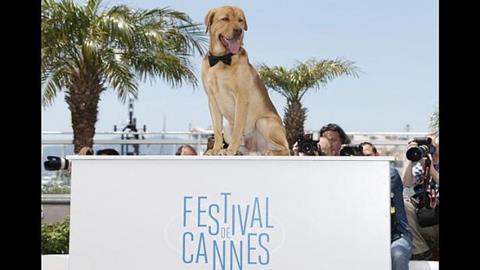 As Screen diligently – or is that doggedly – reported, Body/Hagen from the film White God, became the first canine to be invited on stage with Thierry Fremaux at the film’s Un Certain Regard Screening.

So surely this mutt [pictured] is in with a chance for the annual Palm Dog Award (which founder Toby Rose will present Friday at 1pm at the UK Film Centre).

Rose tells Screen: “Body is very much the one to beat, but we have dogs in Pudsey: The Movie (in the Marche), The Rover, Saint Laurent. Those are the ones we’re foaming at the mouth about. Last but not least, Jean-Luc Godard’s Goodbye To Language has Godard’s own dog in it. That’s a wild card.”

There is extra excitement surrounding the Palm Dog this year, as the event will feature in Nick Livesey’s new UK romantic comedy entitled, appropriately, Palm Dog, about a group of Sussex villagers who make a film to try to win the Palm Dog award in Cannes.

The film also builds on the premise that dogs can be babe magnets. Writer/producer Nick Hamson is working on the forthcoming feature here in Cannes this year, shooting some footage of actors (including Camilla Rutherford) marching down the Croisette with 10 dogs (eight assorted breeds being driven down from the UK, and two Afghan hounds from France).

The gang will also be shooting on a yacht and at a villa (every pool party needs a dog in the mix). Palm Dog the film hopes to shoot in the autumn with plans to launch the film in Cannes Marche next year. Sounds like they are barking up the right tree.