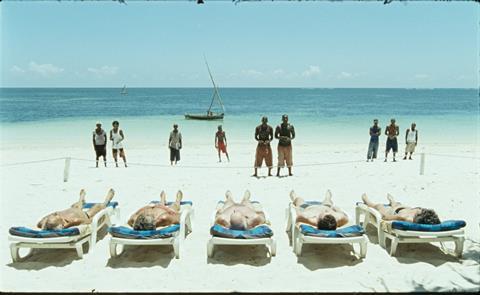 The pursuit of happiness inevitably leads to disappointment in Paradise: Love (Paradies: Liebe), the first in a trilogy of tales from Ulrich Seidl focusing on three women from the same family. In Love, plump, fiftysomething mother Teresa heads to Kenya in need of love, affection and a renewed sense of her own desirability. Like Laurent Cantet’s Heading South (Vers Le Sud), Love underlines the way in which sex tourism is a form of neo-colonialist oppression but leaves the impression that no matter how striking the aesthetic, Seidl is really not telling us anything we don’t know already.

Seidl remains an impressive visual stylist and is also able to create a film with a balanced view of how sex tourism creates a sense of exploitation on both sides of the divide albeit one born from very different forms of desperation.

The unflinching approach to the subject matter will be recommendation enough for followers of Seidl’s previous work but a meandering, repetitive narrative is unlikely to broaden his audience. Seidl has built a career around investing fictional stories with a documentary-like search for emotional truth.

Love adheres to his methods of working without a traditional script and developing individual scenes from detailed planning and the interaction of professional and non-professional actors. In Love, that results in memorable, highly convincing naturalistic moments as Teresa discusses her desires and vulnerability with a giggly fellow sex tourist or bitterly confronts the reality of a country where love is a transaction rather than a genuine response of the heart.

It also creates a rambling, overlong film that just doesn’t grip sufficiently to overcome the predictability of the story. Margarethe Tiesel’s Teresa works with disabled people and endures her teenage daughter’s sullen manner and lazy habits. When she leaves Austria to join the “sugar mamas” on the beaches of Kenya, she feels a certain entitlement to her share of love and sex. In Kenya, she discovers a world where young black men will say and do almost anything to flatter and seduce older white woman as long as the price is right.

Her initial qualms are set aside when she meets Munga, a gentle charmer who makes her feel young and wanted once more. The illusion of love is quickly shattered as he requests money for his sister’s sick daughter and a succession of ailing relatives and equally worthy causes.

Disillusioned but undeterred, the more cynical Teresa continues her quest for pleasure with other men but can never quite escape her feelings of loneliness. Seidl captures the fleshy, saggy bodies of Teresa and her middle-aged friends with a style that falls somewhere between the jollity of Beryl Cook and the unsparing eye of a Lucian Freud portrait.

Seidl retains a strong visual grip throughout with tableaux depicting the modest hotel entertainment in matching zebra print outfits or a sandy coastline with a firm line of demarcation between the beached whale tourists on the one side and the lean black beach boys on the other.

Seidl remains an impressive visual stylist and is also able to create a film with a balanced view of how sex tourism creates a sense of exploitation on both sides of the divide albeit one born from very different forms of desperation. There is a welcome complexity to his depiction of a situation in which the white female tourists are both arrogant and foolish and the black male residents are endlessly available and yet somehow stubbornly detached from it all.

Subsequent films in the trilogy will follow Teresa’s sister spiritual quest for happiness at a Catholic mission (Paradise: Faith) and Teresa’s daughter attendance at a diet camp for teenagers (Paradise: Hope).