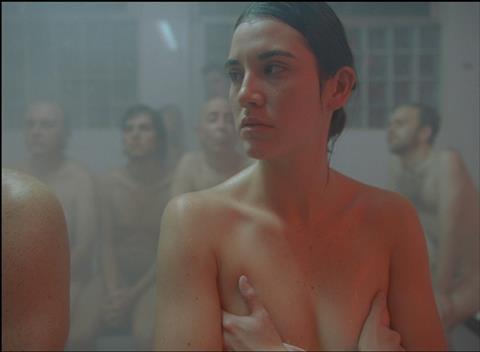 The title means ‘After the Shadows, Light’, but viewers can expect to feel plunged into obscurity rather than enlightened by Carlos Reygadas’ Post Tenebras Lux. The Mexican director’s fourth feature is by far his most perplexing, even if in some ways his simplest. Ostensibly telling the story of a family and its travails, Post Tenebras Lux is militantly non-linear, impressionistic and tantalising - which will make it a very hard sell after his lyrical, relatively accessible Silent Light.

The film feels genuinely, bracingly experimental in that it seems to be searching for its own meaning and form.

In some ways, Post Tenebras Lux is a tougher proposition than, say, Leos Carax’s Holy Motors: that film tells you from the start that you’re dealing with the stuff of Surrealist dream, so in a sense you know where you are. Post Tenebras Lux, by contrast, fluctuates disconcertingly between registers.

We have impressionistic and very beautiful images of home and nature, in a vein not dissimilar to Terence Malick’s The Tree of Life; scenes that appear to tell a conventional story, albeit a chronologically; others that seem to bear little relation to the rest; and a few moments so outré that they could have been spliced in from another film entirely. This is, in fact, a film that is neither obviously avant-garde nor narratively approachable, but a dizzying, and often exhilarating synthesis of both modes.

The film begins with a mesmerising sequence showing a small girl, Rut (Rut Reygadas) wandering in a muddy countryside while dogs run around her, and cattle and horses move around in the background; as the sounds of nature become deafening and lightning fills the night air, the tension becomes downright oppressive. The action then cuts to the interior of a house, and the bizarre spectacle of a CGI devil, complete with forked tail, stalking up the corridors casting a lurid red glow.

Then the film shifts into something like a realist mode, showing Rut’s rural family life with parents Nathalia (Acevedo) and Juan (Jiménez Castro) and slightly older brother Eleazar (Eleazar Reygadas). Occasionally we see scenes of family happiness, with the utterly charming kids romping around, that seem quasi-documentary in their easy looseness; other scenes are highly staged, notably when Juan brutally batters one of the family dogs (just out of sight).

Other scenes don’t seem obviously connected to the rest: scenes from a wealthy urban dinner party, at which we apparently see Rut and Eleazar a few years older; a rugby match at a boys’ school in England; and an interlude in a swingers’ sauna, apparently in France, where Nathalia is a big hit with the naked clientele.

The film’s strangeness lies not only in its extreme fragmentation, but in its visual execution too; it’s shot in Academy ratio, often using a wide-angle lens that distorts, blurs and magnifies the imagery at the edges. Alexis Zabé’s vividly beautiful photography variously makes the images seem spontaneously caught, or deliberately framed and fixed in a video art manner - and it could be argued that this film has much more in common with gallery video than with most contemporary theatrical art cinema.

The result is much more fluid and elusive than Reygadas’s other films, and you could easily imagine the film evolving further, as a work in progress, because there’s no obvious closure to it. There are, however, two key incidents that bear the familiar stamp of Reygadas in their abrupt violence - one, at the end, so jaw-droppingly nutty that it makes the film seem almost like an elaborate shaggy-dog story.

However, you never feel that Reygadas is out to impose his unorthodox outlook, to impress himself on you as a visionary. There is a vision here, certainly, but the film feels genuinely, bracingly experimental in that it seems to be searching for its own meaning and form, rather than asserting them ready-made.