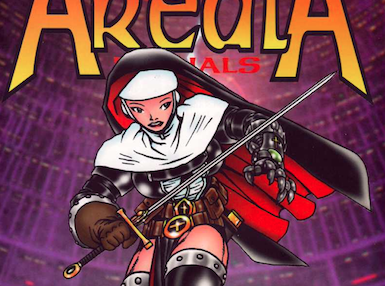 A.J. Annila is attached to direct what is being conceived as the first in a live-action trilogy based on the comic-book series about a covert order that operates within the shadows of the Vatican to protect mankind from evil.

The first instalment will centre on a disillusioned young paraplegic whose body is restored when she chances upon a halo left on earth by a fallen saint.

The Warrior Nuns believe her to be a prophecy and train her to be their next leader, although the young woman has other plans.

The manga series was published and translated into numerous languages from 1994-2003. English optioned film, television, interactive and merchandising rights from Dunn to the character universe of the Warrior Nun Areala series.

“I love the deep, unique mythology and a strong lead female heroine,” said Annila, who is represented by ICM Partners and Echo Lake Management. “But what gets me the most excited is the chance to direct an entertaining action film with nuns who kick ass!”

“I am really excited to see the Warrior Nun universe of Sister Shannon Masters, Shotgun Mary, Sister Crimson and Father Gomez brought to the big screen as a live-action film,” added Dunn.

English continued: “We will keep faithful to Ben’s vision: the film will have an abundance of action and dark humour steeped within ancient Catholic lore, however it will be grounded in reality with brutal hand-to-hand combat with strong female characters that have a deep faith to protect humanity from the forces of evil.”

“Ben has created a rich underground universe of characters that can spin off to various platforms such as film, television, gaming, online, mobile and merchandising,” said Burke.

“The story spans many centuries and explores the rich history of the Warrior Nuns. This allows us to go back and forth in time to explore their stories. As in Ben’s series, we also plan to have the characters cross over into other cult manga and graphic novel properties.”