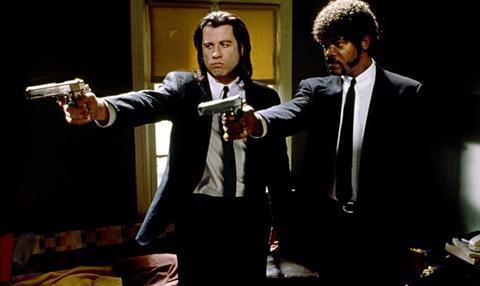 Writer-director Quentin Tarantino didn’t so much explode onto the scene as set it alight. After his 1992 feature debut, heist drama Reservoir Dogs, showcased his uncompromising style, his 1994 sophomore project Pulp Fiction made him an internationally recognised — and bankable — name.

It was also a shot in the arm for the US industry, which was floundering in a creative no-man’s land at the tail end of the 1980s action boom; on its release, Entertainment Weekly’s Owen Gleiberman called the film “nothing less than the reinvention of mainstream American cinema”.

Perhaps surprisingly for something so original, Pulp Fiction has its roots in classic film. A life-long movie obsessive, Tarantino set out to recycle three familiar stories — a boxer asked to throw a fight, a mobster looking after his boss’s wife and hitmen on a job — and weave them into an omnibus-style narrative. The title itself is also an homage to the pulp magazines of the 1930s.

Despite its nod to tradition, Pulp Fiction was like nothing audiences — or the industry — had ever seen, thanks largely to Tarantino’s dogged refusal to compromise on any aspect of its making. When every major studio (including TriStar, with which executive producer Danny DeVito’s Jersey Films had a first-look deal) passed on the project because of its violence, Tarantino just kept looking for someone who appreciated his vision.

That turned out to be Harvey Weinstein, whose Miramax had distributed Reservoir Dogs and who acquired Tarantino’s follow-up before he had finished reading the screenplay. And when Weinstein balked at Tarantino’s casting of flatlining actor John Travolta, the director held his nerve until they reached an eleventh-hour agreement.

Weinstein, for his part, understood the power of Pulp Fiction and, crucially, knew how best to handle its release. The plan was to make it a must-see film, building word of mouth through a small number of carefully planned screenings. After sensationally winning Cannes’ Palme d’Or in May 1994, the film wasn’t seen again until September’s New York Film Festival, just a month before release.

Ground-breaking at the time, this ‘iron curtain’ strategy is now a staple of modern film marketing — because it worked. Spectacularly. Pulp Fiction went on immediate wide release and was soon the number-one film in the US, grossing $214m worldwide. After the Weinsteins ran a targeted Oscar campaign it garnered seven nominations, including for best picture, and a win for best original screenplay.

This awards recognition cemented Tarantino’s clout as a film-maker and ratified the Weinsteins’ faith in him as auteur. (Financial validation had come much earlier, when Miramax profited on its investment by selling foreign rights for $11m before production began.) “We are in the Quentin Tarantino business,” Bob Weinstein told The New York Times in 1994, and it is a business that has reaped substantial rewards over multiple films in the two decades since.