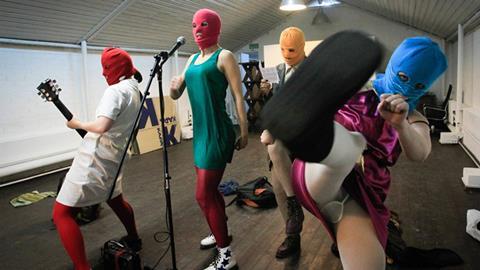 On February 21, 2012, members of the punk activist group Pussy Riot, clad in brightly colored ski-masks, snuck into the hallowed halls of Moscow’s Cathedral of Christ the Savior, and performed a protest song called Virgin Mary, Put Putin Away. Soon after arrested and charged with undermining “the social order” in a much-publicised trial, the three convicted members of Pussy Riot—Nadia, Katia and Masha—quickly became international symbols of the injustice of Vladimir Putin’s Russia.

Perhaps it’s the filmmakers’ intentions to channel the group’s punk spirit, but one gets the sense from this frenetic documentary that contemporary Russia is a total mess.

Filmmakers Mike Lerner (Hell And Back Again) and Maxim Pozdorovkin (Capital) have a great story to tell in Pussy Riot’s activism and arrest. But their documentary—capturing events that continue to unfold—feels scattershot in places, as if it was rushed to completion. Considering that Masha was just denied an appeal this week in the Russian courts, the filmmakers might consider returning to the editing room to refine and update their material. Still, the story’s currency and popular appea l- even Madonna had Pussy Riot painted on her back at a recent concert - should propel the documentary into select international TV markets.

The film begins with a brief introduction to Pussy Riot’s feminist performance art: Several young women, wearing their now trademark balaclavas, randomly show up in public places, such as a beauty salon or a public square, screaming provocative lyrics, raising their fists, kicking their legs, all with the specific aim to shock the public and raise political consciousness. Like an angrier “grrl power” version of The Yes Men, it’s clear why the group has seized the imagination of Occupy and liberal activists the world over. They’re funny, they’re strong, and, when the masks come off, they’re also attractive.

Nadia, in particular, comes across as the biggest rabble-rouser of the bunch; during police interrogation scenes caught on video, she offers a wry, mischievous smile that shows no fear, and while incarcerated, she wears a “No Pasaran!” protest shirt. One member of the offended Orthodox Church evocatively calls her a “strong demon.” Masha and Katia are also captivating figures; intelligent and fierce, their final statements in court are inspired, personal and passionate calls to political action and powerful indictments of the absurdity of their circumstances.

Much of the film centers on their famous court case - from the indictments, which are read in total chaos, with the press and police officers crowded into what looks like a small hallway, to the media circus of the “show trial” itself, as it was labeled, referencing the Soviet purge trials of the 1930s.

The filmmakers also interview the fathers of Nadia and Katia and the mother of Masha, who offer candid thoughts on their daughters’ political antics. Nadia’s father is the biggest surprise - who has enabled and supported Nadia’s activism, which has a storied past in and of itself. But it appears that the filmmakers have not had direct access to the women themselves, relying only on found video footage of their performances, arrest and trial. Perhaps for this reason, the film doesn’t give us access to what’s going on inside the minds of the Pussy Riot members. There are other crucial, though neglected, characters that turn up, such as Nadia’s husband.

The documentary also inter-cuts a number of scenes without giving much context to what’s going on: At some point, we see other Pussy Riot members staging a punk protest and burning a Putin poster, but it’s not clear where or when this action took place. Other brief images of Pussy Riot performances or Russian iconography show up briefly in the film for no apparent reason.

Perhaps it’s the filmmakers’ intentions to channel the group’s punk spirit, but one gets the sense from this frenetic documentary that contemporary Russia is a total mess. Ironically, Pussy Riot’s main target, President Putin, doesn’t really come across as the bad guy; rather, it is Russia’s backward-looking law enforcement and legal system and its Russian Orthodox fundamentalist community that are the main bugaboos on display.

The film opens with a terrific quote: “Art is not a mirror to reflect reality, but a hammer with which to shape it.” One would hope that the filmmakers behind Pussy Riot – A Punk Prayer will take heed, further shaping and sharpening their own work.