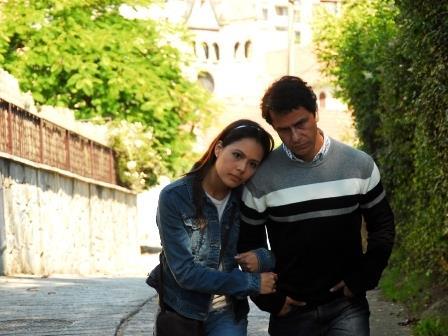 What is it about Spain that has precipitated over the past decade a number of films in which huge old houses are not only the principal setting but also the dominant character? Add Rabia to a list that includes Alejandro Amenabar’s The Others (2001) and The Orphanage (2007), by Juan Antonio Bayona.

Here, however, Sebastian Cordero adds little to the genre. He merely surveys the interior of a villa with long, baroque tracking shots and adds gratuitous dark scenes in an attempt to impart some meaning to its walls, rooms, and stairways. The film is hackneyed, with held chords and tinkly piano relentlessly signaling danger. Its promotion as a commentary on the ill treatment of Latin American immigrants working in Spain is a ruse that goes nowhere. Rabia might do some business in Spanish-language markets, where his 1999 Ratas, Ratones, Rateros was a success, but may struggle to make much of a dent elsewhere.

The “rage” of the title lies within Jose Maria (Mexican actor Sanchez Parra), who works at a construction site and has become deeply involved with Rosa (Colombian actress Garcia), a maid for a wealthy Spanish family that owns a gated three-story villa.

Impulsive and blinded by love for Rosa, he savagely attacks two locals who she says have mouthed off to her, then inadvertently kills his foreman after the Spaniard snidely comments that all the other men want to sleep with her. All three of Jose Maria’s victims do make derogatory comments about his overseas origins, but that is about as far as the film’s exploration of the plight of poor foreigners toiling on Spanish soil goes.

On the lam, Jose Maria hides in the attic of Rosa’s employers’ large home, in which the elderly Torres couple (Spanish performers Velasco and Elorriaga) share a miserable life together. Even Rosa does not know her lover’s whereabouts, and the film doesn’t bother to explain how he entered the grounds and home in the first place.

Rabia, which began with sweet love scenes and soft music, thus becomes a thin thriller, with Jose Maria eking out a primitive existence upstairs and observing the behavior of the Torres family towards his now-pregnant girlfriend.

Mr. Torres is contemptuous of the servant—Cordero does present a simplistic class distinction—but Mrs. Torres, an alcoholic, embraces the sad girl and the expected child. Their grown son, Alvaro (Brandemuhl, put to much better use in Jaime Rosales’s Hours of the Day), rapes her, and daughter Marimar (Bollain) visits and reveals to the audience that she is as mercenary as her brother.

The question becomes: And? None of these characters are developed, and none are particularly likable. Even Rosa, collateral damage to Jose Maria’s criminal outbursts, is played by Garcia with so little affect or personality that there is little there to empathise with. The rats living with Jose Maria in the attic are more energized.