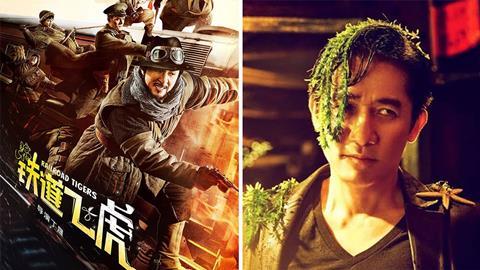 The 1940s action comedy, about a railroad worker who leads a team of freedom fighters against the invading Japanese, opened only in third place two weeks ago, after The Great Wall and See You Tomorrow. Director Ding Sheng has collaborated with Chan previously on Little Big Soldier and Police Story 2013.

New local romantic comedy Some Like It Hot opened in third place with $24.65m from its three-day opening weekend. Starring Yan Ni, Xiao Shenyang and Xiao Yang, it ranked second after Railroad Tigers on Friday before shooting to No.1 on both Saturday and Sunday.

See You Tomorrow dropped from the second to the fourth place with $21.69m for a 10-day total of $62.05m. Toplined by Tony Leung Chiu-Wai and Takeshi Kaneshiro and executive produced by Wong Kar Wai, the romance comedy marks the directorial debut of popular author Zhang Jiajia (who also scripted September table-topper I Belonged To You).

The Wasted Times starring Zhang Ziyi rounded up the chart on $1.65m for $16.84m after 17 days, along with new local comedy The Insanity on $1.50m from its first three days.

Last week’s box office dropped by approximately 8%, while December became yet another month of negative growth, the seventh month in 2016.

Rogue One: A Star Wars Story, dated for Jan 6, is expected to be the first Hollywood hit in 2017.