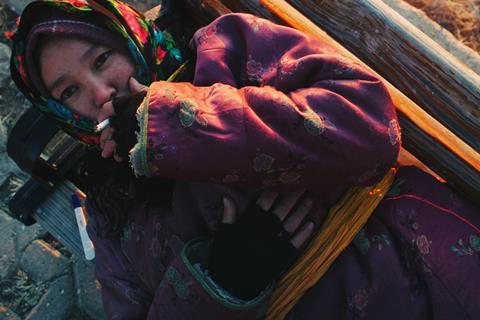 Death, birth and the mysteries of the ages unfold in leisurely, sometimes droll fashion among calves, camels and the ghosts of dinosaurs, in the Berlinale’s Mongolian competition entry Öndög. Chinese director Wang Quan’an won the Golden Bear here in 2007 with Tuya’s Marriage, also set in Mongolia, and a Silver Bear for best script with 2010’s Apart Together. Following a further competition entry with White Deer Plain (2012), Wang returns with a hugely engaging, disgressively structured piece that combines a cosmic sense of landscape with intimate character drama; affecting performances, dazzling landscape photography and charismatic animal presence should earn critical applause and a more than respectable reception wherever accessible ethnographically-flavoured art cinema is welcome.

Wit, tenderness and philosophical speculation come together in an easy manner

The film kicks off in the darkness with a shot from a vehicle travelling fast over the plains at night: voices off discuss a mission to hunt down wolves. The headlights magically reveal an encounter with a fast-moving herd of horses before the car comes to rest in front of a woman’s naked, dead body. In the morning, police arrive to investigate, and call in a local herdswoman (Dulamjav Enkhtaivan) to shoot a wolf that’s hovering round the corpse.

The police head back to base, leaving a gauche young male recruit (Norovsambuu Batmunkh) to guard the body. In a number of increasingly comic sequences, he keeps himself warm by dancing to music on his phone, silhouetted against the horizon: watch for what is certainly cinema’s most eccentric use ever of Elvis’s ‘Love Me Tender’.

The herdswoman has meanwhile headed home to slaughter a sheep, with the help of a motorbike-riding neighbour and old flame (Aorigeletu). She then rejoins the shivering young cop, and offers him firelight, warming booze and sympathetic chat. A scene of flirtation, culminating in snatched passion, is deliciously acted and inventively executed, alternating between shots from either side of the camel that forms their shelter from the wind.

The next day, the young cop returns to police base, where his elderly superior serenades a female intern on his behalf. It works, insofar as the two young folks are seen riding a motorbike together, fireworks ablaze, before going their separate ways. Meanwhile, back on the plains, the neighbour turns up to help the herdswoman deliver a calf in an extended real-time take – animal births always being a guaranteed money shot in ethnographic fiction. The pair discuss the dinosaurs that once roamed the region, and the neighbour gives the herdswoman an öndög – ‘egg’ in Mongolian, here meaning a fossilised dinosaur egg. The woman tells her friend that she has a secret, and things come to a satisfying conclusion in a deliciously abstract closing image of lights in the dark.

Working from a baseline of naturalism, director Wang and DoP Aymerick Pilarski add a distinctive streak of visual stylisation, notably in wide shots of the plain that frame the landscape to resemble an abstract painting, a thin strip of horizon dominated by a vast sky - sometimes with the addition of to-and-fro camera moves, as in the long take that introduces the characters in a drily comic, almost Keatonesque way.

Wit, warmth and philosophical speculation come together in an easy manner, in a female-centred drama that’s striking in its depiction of an independent heroine pursuing her desires and offering tender protection to an inexperienced younger man, the cop. A cast of first-timers, apparently well-versed in the ways of plains farming, give affecting, confident performances, and a closing flourish of violin and Mongolian throat singing is irresistible.