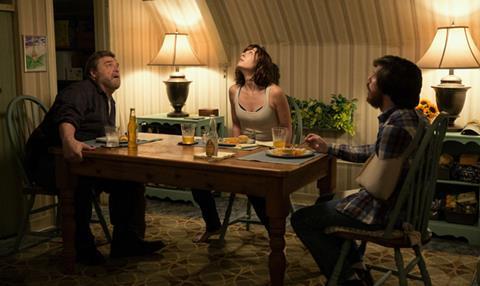 Forget monsters: in 10 Cloverfield Lane, it’s the paranoia and claustrophobia that will kill you. In this sort-of follow-up to the 2008 found-footage thriller Cloverfield, the threat of gigantic creatures rampaging through Manhattan is replaced by a queasy, close-quarters showdown between a scared young woman and the burly, intimidating man who claims to have rescued her from an unseen apocalyptic event.

Losing the found-footage conceit but gaining bigger stars than its no-name predecessor, 10 Cloverfield Lane will entice those hoping for a second helping of monster mayhem

Mary Elizabeth Winstead and John Goodman make for fine sparring partners and the film has enough low-key, slow-burn suspense to keep the simplicity of the premise humming along.

Opening in the US on March 11 and the UK on March 18, this Paramount offering probably won’t match Cloverfield’s $171m worldwide gross, lacking the buzz and high-concept hook of the original film. Losing the found-footage conceit but gaining bigger stars than its no-name predecessor, 10 Cloverfield Lane will entice those hoping for a second helping of monster mayhem, but some viewers may be disappointed by this far more intimate and psychological horror film.

Winstead plays Michelle, who as the film opens, has left behind a romantic relationship for unknown reasons, driving off into the night. In the middle of nowhere in Louisiana, she gets involved in a violent car crash, waking up in the underground bunker of Howard (Goodman), who says that he pulled her from her vehicle right before a devastating airstrike destroyed the American Southwest. Information is scant — Was it aliens? The Russians? — but Howard and his friend Emmett (John Gallagher, Jr.) are prepared to stay in Howard’s well-fortified bunker for years until the nuclear radiation in the air has dissipated to a safe level.

Making his feature debut, director Dan Trachtenberg teases the audience with the obvious question tormenting Michelle: Is Howard telling the truth about an attack, or is he a psychopath who has kidnapped her? 10 Cloverfield Lane gets much of its modest, dark pleasures from letting us try to deduce the answer, presenting just enough evidence on both sides that we’re as unsure of the situation as Michelle is. On the one hand, Michelle does see a woman scarred by radiation begging to be let into the bunker. On the other, Howard’s overall creepy vibe and his oblique references to a daughter who died mysteriously make him an unreliable guide to what has occurred.

The majority of the film takes place down in the windowless bunker, which Howard, a survivalist just waiting for any opportunity to use his military training, has fashioned to withstand doomsday with substantial rations, DVDs and board games. Echoing elements of Room and the section of Steven Spielberg’s War Of The Worlds in which Tom Cruise encounters Tim Robbins’ unhinged loner, 10 Cloverfield Lane leaves us feeling as trapped as Michelle, putting us in her corner from the start.

Winstead is strongly sympathetic in the role, constantly illustrating her character’s calm smarts. No shrieking damsel in distress, Michelle coolly observes her surroundings, quietly deducing what’s really going on and fashioning an escape plan. But the actress embeds just enough doubt in Michelle to make her wonder if her deeply discomforting captor isn’t, in fact, telling the truth.

In this face-off between Michelle and Howard, Gallagher is 10 Cloverfield Lane’s intriguing wild card. Emmett knows Howard and trusts him, but his sweetness and decency make him begin to take Michelle’s side, suspecting that perhaps Howard isn’t being straight with them. Nonetheless, with his lazy Southern accent and laidback manner, Emmett also projects an aura of mystery, suggesting that perhaps he’s hiding his own secrets. Michelle isn’t entirely sure she can form an allegiance with him, and Gallagher keeps his character’s agenda deliciously unclear.

As for Goodman, this is one of his more substantial film roles in quite some time, and he exudes a rumbling menace that permeates every scene. With his large frame, awkward manner and unsmiling eyes, Howard embodies our collective impression of child molesters, rapists and murderers — the disturbing outsiders nestled within tiny communities — and Goodman does nothing to make his character ingratiating. But at the same time, he doesn’t overdo Howard’s strangeness with hammy theatrics. Instead, it’s a performance of unsettling stillness, which makes his occasional explosions all the more shocking.

Because of its title, though, 10 Cloverfield Lane carries a built-in expectation that, eventually, we’re going to be seeing some monsters. Otherwise, why align this film with the 2008 hit? That unavoidable fact diminishes the suspense a little — if Howard is completely lying, then this is just a coy, conventional hostage movie — but Trachtenberg juices the premise enough to produce sufficient B-movie chills.

Without revealing any spoilers, those who want scary creatures won’t go home disappointed. But the scariest of the bunch remains Goodman’s unnerving creation.