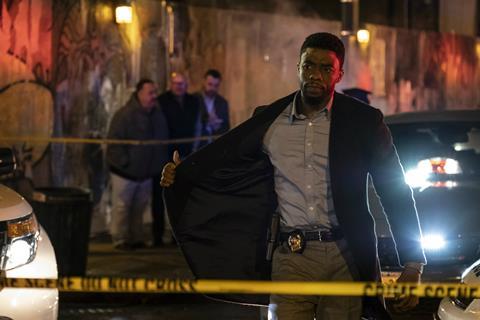 Chadwick Boseman’s starring vehicles haven’t always matched the intensity and calm swagger that he brings to the screen - apart, of course, from Black Panther. Unfortunately, that tendency continues with 21 Bridges, a solid but forgettable crime thriller whose best asset is Boseman’s commanding presence. A pretty standard story about a cop on the trail of some killers — which, predictably, isn’t as cut-and-dried as it first appears — television director Brian Kirk’s (Luther) semi-stylish B-movie benefits from some strong supporting performances, but the twists are fairly obvious and the execution consistently unremarkable.

That said, audiences might turn out simply to see Boseman, a much bigger name now thanks to the Marvel Cinematic Universe than he was while playing real-life figures such as Jackie Robinson (42) and James Brown (Get On Up). Opening November 22 in the UK and US (after a few delays), 21 Bridges is bravely scheduled opposite Disney’s Frozen II and the star-studded whodunit Knives Out. Action aficionados will be intrigued, although muted word of mouth could curtail grosses.

Boseman plays Andre Davis, an edgy New York detective whose willingness to fire his weapon has gotten him in trouble with Internal Affairs. After a cocaine heist in the city goes wrong, criminals Michael and Ray (Stephan James and Taylor Kitsch) decide to shoot their way out, killing several cops in the process. Reluctantly partnered with narcotics detective Frankie Burns (Sienna Miller), Andre orders all entries points in and out of Manhattan closed so that they can catch the thieves. They are only given a few hours to complete their manhunt before the city is reopened, however.

Kirk, who co-created Luther, ensures that 21 Bridges has a gritty, after-hours vibe. (This ticking-clock thriller takes place from about midnight until a little after dawn the following morning.) That narrative urgency helps ramp up the suspense, but soon it becomes clear that there’s more going on than a simple drug theft — and that Michael and Ray are unwitting pawns in a much more insidious conspiracy.

Boseman and Miller are winning as two streetwise cops who must learn to work together. 21 Bridges overdoes the tough-talking dialogue, but the lead actors make Andre and Frankie a compelling crime-fighting duo. (British actor Miller’s exaggerated New York accent isn’t too bad, either.)

Another highlight is James, excellent in last year’s If Beale Street Could Talk, who lends the same soulful gentleness to his role as a desperate low-level criminal who didn’t realise what he was signing up for when he agreed to take part in this heist. 21 Bridges becomes interesting when Kirk segues back and forth between the cops and the crooks, hinting at their inevitable confrontation, although neither side knows everything that is going on. When Boseman and James finally meet, their scenes have an unexpected charge, since we have gotten to know them both well.

The movie leans hard on its bursts of violence and down-and-dirty attitude, but Adam Mervis and Matthew Michael Carnahan’s screenplay mostly regurgitates crime-thriller tropes and familiar character types. (Veteran character actors Keith David and J.K. Simmons are trotted out to play Andre and Frankie’s superior officers.) And although the shootouts and chase sequences have a muscular efficiency, there’s little innovative about Kirk’s staging. More unfortunate is the fact that 21 Bridges occasionally stoops to some of the genre’s silliest inclinations. (The bad guys are always terrible shots, while our heroes never miss.)

Much of this can be forgiven simply because Boseman invests so deeply in his one-dimensional character. Obsessed with uncovering the truth rather than simply gunning down these crooks, Andre is unbendingly virtuous, and as he often does, Boseman manages to make that quality inspiring rather than strident. The longer Andre pursues Michael and Ray, the more convinced he is that he has stumbled into something nefarious. Because Boseman is so arresting, we’re willing to follow along — even if just about every plot point and big reveal is telegraphed well in advance.