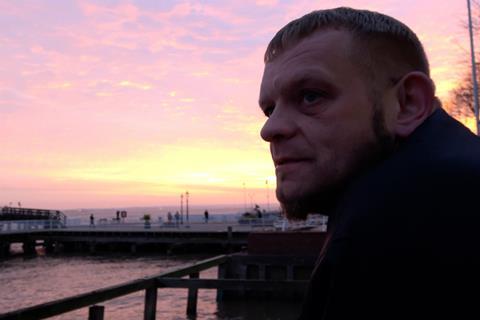 The hopes and hardships of one individual reflect wider issues within modern Britain in A Northern Soul. The latest documentary from A Syrian Love Story director Sean McAllister confirms his longstanding ability to bring out all the humanity in stories of everyday lives. The Sheffield Doc/Fest world premiere should be the start of a healthy festival journey for a film that was made for UK TV channel BBC2 and seems a natural fit for small screen viewing.

Speaks of poverty, class, a Britain in transition and what hope there is of a better future

McAllister was selected as the Creative Director for the opening event of Hull’s time as UK City Of Culture in 2017. He returned to his hometown, moving back in with his elderly parents and confronting a city desperately in need of renewal and regeneration. He also made contact with Steve Arnott, a warehouse worker hoping that the City Of Culture might provide the impetus for him to realise his long simmering artistic dreams.

Arnott wants to use his hip hop talents in service to the city’s children. A bus is converted into a mobile music recording studio that visits primary schools with the aim of inspiring the pupils and boosting their self confidence. We are told that one in three children in Hull live in poverty. Arnott is the flip side of a City Of Culture marked by grand events and celebrity support. He is very much the odd man out in the celebrations, pushed to the edges of civic events and media gatherings. “There are not a lot of people here who need to be up at half past four to go to work,” he observes.

McAllister follows Arnott as he attempts to make his Beats Bus a success story. His working life, financial position, personal circumstances and debts all speak of a working-class Britain blighted by insecurity and suffering the long-term impact of austerity cuts and industrial decline. McAllister’s father is enjoying retirement after a lifetime of employment in a city that once flourished, and his pension is more than Arnott now earns.

McAllister’s style is deceptively casual as he merely seems to follow Arnott around, allowing the viewer to become intimately immersed in his life. A string of conversations and seemingly banal questions prompt Arnott to talk movingly about his desire to be a good parent, his passion for the Beats Bus project and his fears for the future. The more you know him, the more you want him to find a way for music and culture to provide him with an escape route. “The camera became my bus out of Hull, “ observes McAllister, acknowledging the personal connection to his subject.

McAllister has a real eye for fascinating characters, focusing in on some of the charismatic children that Arnott chooses as part of the Beats Bus crew. Eight year-old Blessing is priceless, a natural born charmer who is funny and vulnerable and could have walked straight out of a Shane Meadows film or a Peter Kay television series. You could happily watch an entire documentary about him.

A Northern Soul is about individuals and aspirations but it also becomes a film that speaks of poverty, class, a Britain in transition and what hope there is of a better future. That might feel like a tall order but McAllister delivers with confidence in his material and the conviction that ordinary lives matter.