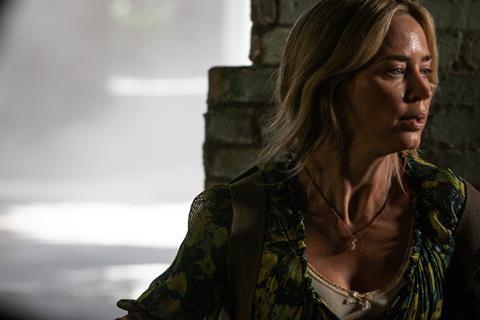 A Quiet Place Part II proves to be an even fiercer and more emotional experience than the first instalment. Expanding its world slightly without losing sight of the elements that made the original so effective, this superb piece of mainstream horror filmmaking is bolstered by some terrific performances, most notably Millicent Simmonds as a deaf daughter assuming the role of family protector in the wake of her father’s death. Writer-director John Krasinski has devised nerve-shredding sequences, and the novelty of lethal aliens with poor eyesight but an incredible sense of hearing hasn’t faded — the silences remain chilling.

Part II can be read as a coming-of-age story as well as a portrait of mourning, and Krasinski masterfully weaves those sentiments into a monstrously scary framework

Initially slated for release in March 2020, just as the pandemic took hold, Part II hits US screens May 28 before arriving in the UK on June 3. Emily Blunt returns for the sequel, joined by Cillian Murphy as a fellow survivor. Reviews should be glowing, bolstering audience expectations: A Quiet Place may have been surprise hit, but Part II won’t sneak up on anyone.

The original ended with Lee Abbott’s (Krasinski) death and his family’s discovery that the frequency given off by Regan’s (Simmonds) cochlear implant repels the aliens. Part II follows mother Evelyn (Blunt), Regan, brother Marcus (Noah Jupe) and and their newborn brother as they venture off on foot seeking safe haven, staying completely quiet so as not to attract the predators’ attention. They soon find the hideout of Emmett (Murphy), a neighbour who has lost his entire family. He reluctantly agrees to help them when Regan becomes convinced that a distant radio station broadcasting ’Beyond The Sea’ is signalling the whereabouts of other survivors.

Krasinski minimises the gore to avoid a more restrictive rating, but even though Part II’s horror isn’t particularly bloody, it’s still blood-curdling. As with the 2018 film, the follow-up utilises silence for maximum discomfort. Regan becomes the sequel’s protagonist (alongside Emmett, who accompanies her on the journey to track down the source of the ’Beyond The Sea’ broadcast), and unsettling quiet envelops certain scenes as the characters carefully measure each step. Seen in a theatre with an audience, Part II ought to recapture the sensation of watching A Quiet Place, in which the juxtaposition of terrifying aliens and our heroes’ need for stillness produced a soundless anxiety that’s almost smothering.

A Quiet Place sometimes leaned too heavily on its mawkish metaphorical themes, blatantly connecting the Abbotts’ struggle to the desire of all parents to protect their children from the big, scary world. Krasinski doesn’t shy away from those concerns in Part II, but the plotting is more subtle, focusing on this family’s grieving process, felt most acutely in how differently Regan and Marcus react to their father’s death. She wants to be brave like Dad was, while Marcus has decided they need to be more fearful so they don’t meet his fate.

Jupe is a fine actor who, unfortunately, has been saddled with a character who’s a little infantilised in the sequel. But Simmonds shines, revealing Regan’s growing confidence. Regan’s rapport with Emmett, who has basically given up after his family’s death, starts off with her viewing him as a father figure, but Simmonds and Murphy give their relationship a lovely nuance that suggests that, in some ways, Regan is the stronger of the two as she prods Emmett to embrace their difficult circumstance.

Blunt takes more of a supporting role — Part II is very much about the Abbott children learning to stand on their own two feet — although she remains effortlessly authentic as a beleaguered, resilient mother. And because we know the Abbotts fairly well after A Quiet Place, Krasinski devotes the sequel’s brief running time primarily to putting them in increasingly horrifying situations, cross-cutting between separate suspenseful plot lines so the simultaneous terrors are even greater than the sum of their parts. Part II can be read as a coming-of-age story as well as a portrait of mourning, and Krasinski masterfully weaves those sentiments into a monstrously scary framework.