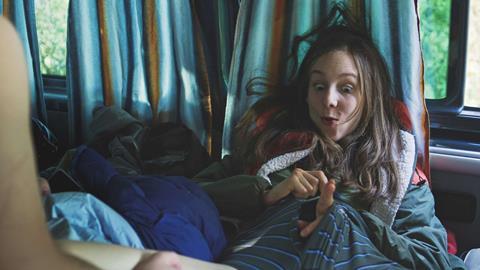 The long walk to freedom is littered with the actions of interfering men who think they know best in A Voluntary Year (Das freiwillige Jahr). There are echoes of Toni Erdmann in this more compact German study of a father/daughter relationship that develops into a wryly observed deconstruction of toxic masculinity. Funny and accessible, it should strike a chord for a broad demographic, resulting in festival invites and some theatrical play although perhaps with a more enticing English title.

Writer/directors Ulrich Köhler and Henner Winkler keep the farcical elements and frustrations of A Voluntary Year credible, scattering chuckles large and small along the way

Jette (Maj-Britt Klenke) is about to leave home and spend a year volunteering in Costa Rica. Her devoted father Urs (Sebastian Rudolph) is a village doctor and has encouraged her to go, hoping it will broaden her horizons. It will also serve as a validation of his liberal values and international outlook. We quickly gain a sense of how single-minded Urs can be. En route to the airport, he is determined to retrieve Jette’s camera from her uncle Falk (Stefan Stern). Unable to reach Falk by telephone, Urs immediately jumps to the conclusion that something has happened to his brother. “I hope he hasn’t started drinking again, “ he frets. Soon, he is clambering over balconies, borrowing power tools and smashing in the door of his apartment only to find that his fears were groundless.

Driven to the airport by her boyfriend Mario (Thomas Schubert), Jette takes the impulsive decision to miss her flight. The two lovers briefly go on the run triggering a chain of events in which Urs constantly tries to take control and Mario shows worrying signs of being cut from a similar cloth.

Writer/directors Ulrich Köhler and Henner Winkler keep the farcical elements and frustrations of A Voluntary Year credible, scattering chuckles large and small along the way. They also allow us to invest in the main characters. In a generous light, Urs might be judged as a father who cares too much. He also displays an angry, arrogant sense of entitlement that Sebastian Rudolph nails in a very physical performance. Urs is very much a guns blazing alpha male, constantly striding towards disaster without pause for doubt or reflection. He is the man who will use brute force to smash down a door, who will confiscate a phone, control a life or do what it takes to resolve a problem, regardless of anyone else’s feelings.

Maj-Britt Klenke is very striking in her first leading film role. She lends a quiet fury to her character’s eyes at Urs’s outrageous assumptions and extreme behaviour. He constantly claims that “we” will make a decision, when he always means “he”. Jette has become someone who doesn’t really know what she wants, but she does realise that something has to change.

Precisely calibrated and appealing in its understatement, A Voluntary Year packs a lot into its tight running time. We get to see different shades of Urs in his relationships and callous attitude to his patients. We also understand that the loving but often truculent Mario might not be the best man for Jette.

Cinematographer Patrick Orth adds to an already appealing package, capturing a sense of village life from its soggy, leaf-strewn lanes to the beauty of a simple sunrise and the animals who routinely stray into the action.