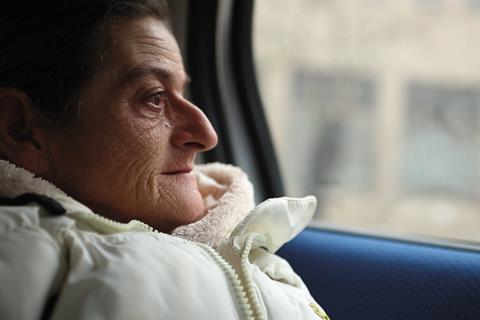 Modern day slavery is given a very human face in A Woman Captured. Bernadett Tuza-Ritter’s documentary about the daily life of a woman who has spent more than ten years as a slave to a Hungarian family provokes a range of responses from shock to anger and ultimately a quiet jubilation. The subject matter and the emotional rollercoaster of what happens makes for the kind of compelling, talking point documentary that should travel extensively.

Everything about A Woman Captured seems designed to break your heart

There are so many aspects of this documentary that initially beggar belief. Patience brings its own rewards as we learn more about Marish and what has brought her to this point in her life. A succession of revelations act like bombshells throughout the film.

Tuza-Ritter keeps her handheld camera relentlessly focused on Marish. Her sallow skin, wizened features and lack of teeth suggest someone much older than her 53 years. By dawn’s first light, we watch her prepare coffee and make cigarettes. She sleeps on a couch and is expected to cook, clean and keep house for Eta and her family. They have taken her identity papers and she is not allowed to leave without their permission. She could be a character who has stepped from the pages of a novel by Dickens or Zola; it is hard to witness such an existence in the 21st century, but it is even worse than we first think.

Eta shows no shame in keeping servants and takes pride in having others do the work that she couldn’t possibly be expected to do herself. She is quite prepared for Tuza-Ritter to film in her house and is happy to accept a payment of 300 Euros a month for the privilege. Eta’s face  is never seen in the film but we hear her issue commands, threaten punishment and wage a form of psychological warfare, telling Marish she is worthless and stupid. We glimpse her arm or her manicured nails with shocking pink varnish as she strokes her pet dog in the manner of a classic Bond villain. In stark contrast, Marish’s arm has been broken as a punishment.

Everything about A Woman Captured seems designed to break your heart. Marish also has a night shift job as a factory worker, and is expected to hand over her entire pay to Eta. We watch her eating the scraps of the family’s leftovers and clutching a slim volume called How To Find Happiness. “It is never anywhere near where I am, “ she states.

It is a reflection of just how involving the film becomes that the viewer burns with indignation. How did this happen? Why does she stay? What would happen if she simply walked out the door and never came back? You also start to question whether a filmmaker should remain a bystander. Shouldn’t she set aside her camera in favour of direct action?

The second half of the film provides some of the answers in what increasingly comes to feel close to a horror film. Just when it all seems too much to bear there is the possibility of Tuza-Ritter becoming an ally in Marish taking charge of her future. The moment that Marish feels confident enough to reveal her true name is a rare display of hope in a disturbing, unsettling film that makes for an auspicious feature debut.