In war-torn 1990s Algeria, two friends attempt to track down an infamous terrorist 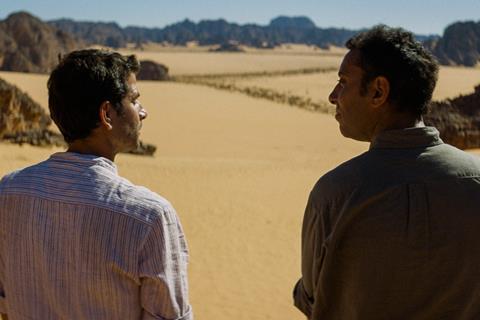 Algerian Amin Sidi-Boumédiène makes an arresting debut with Abou Leila, which bows in Cannes Critics’ Week with a patient, pensive and often surrealist view on violence’s lingering influence. Set in his civil war-stricken homeland circa 1994 and anchored by strong performances from stars Lyès Salem and Slimane Benouari, this road-trip drama follows two lifelong friends as they head into the Sahara in search of the titular terrorist, weathering daily conflict in the process. Reality and fantasy intertwine on the duo’s journey, which is as much metaphorical and emotional as literal, but this ruminative film leaves a firm imprint.

With its sweeping desert surroundings lensed with vivid precision, and an earthy palette of burnt reds, oranges, browns and yellows monopolising its frames, Abou Leila screams for big-screen viewing — which bodes well for additional festival play. Given its setting, imagery and storyline, pitching the feature as a contemplative absurdist western should help attract audiences, and the label fits; favourable similarities with elements of Samuel Moaz’s Foxtrot, including its interrogation of the impact of ongoing combat, should assist as well.

Before Lotfi (Salem) and S. (Benouari) hit the road, motivated by a tenuous lead, a photograph and S.’s feverish certainty, Sidi-Boumédiène starts Abou Leila with a street attack, offering an instant reminder of the war raging at the time and showing an early glimpse of his sharp directorial eye. Gunmen sit in wait outside a walled-off home, fire at their target, then become engaged in a shootout with police, all in a space that couldn’t seem more ordinary.

Jumping to the film’s protagonists, nothing is ordinary as they drive; not S.’s tip, nor his wavering mental state, and definitely not the stern, concerned Lotfi’s determination to get his pal as far away from Algiers as possible. At their first overnight stay, S. awakes screaming and shaking, haunted by a nightmarish memory of his childhood. At their next stop, his paranoia becomes palpable. The further that the friends travel beyond the city — and the more that Lotfi questions everyone they meet about the whereabouts of Abou Leila (Hocine Mokhtar), all while shouldering his own doubts — the more that the fragile S. unravels.

Writing, directing and editing his first feature after shorts Tomorrow, Algiers?, Al Djazira and Serial K., Sidi-Boumédiène plays purposefully slow and loose with the specifics of Lotfi and S.’s mission, unfurling their quest gradually and letting actuality and the absurd blend together. In immersing the audience in the characters’ mindsets, the approach is rich, resonant and involving, rather than obtuse or disorienting. It also inspires the movie’s most striking images and evocative visual metaphors, saying more about the internal state of two men habitualised to a life of constant threat and terror than the languid dialogue could ever manage.

Although the film’s length —140 minutes — can feel leisurely, Abou Leila’s central duo continually earns attention. The most naturalistic aspects of a heavily stylised feature, aside from the sprawling landscape, Salem and Benouari inhabit their roles with the requisite comfort of old pals long accustomed to each other’s fears and flaws.

And yet they’re equally effective when they’re apart. Sidi-Boumédiène frequently flits between the two as they go their own ways during the trip, honing in on the pain each wears yet can never voice. Indeed, even with its stints of surrealism, exploring how the world grinds this pair down individually, and how the relentless shadow of violence affects different people in different ways, proves the movie’s most crucial and powerful juxtaposition.