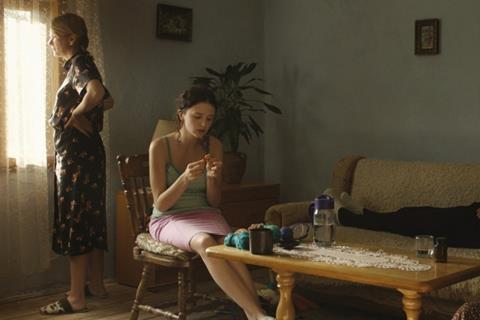 As a first feature from a Kosovan writer-director with a reputation in short and experimental films — and a woman telling an emphatically female story — on paper Aga’s House is a compelling prospect. In practice, though, this story of a group of diverse women living in a remote mountain location proves quite exasperating.

It’s difficult to judge whether Lendita Zeqiraj simply has great faith in the likeability of her characters, or if she’s taking a consciously risky approach in testing audience patience with their behaviour until her punchline puts it in context – the end justifying the means. Either way, while her denouement is undoubtedly powerful, reaching it feels like a long haul. The result may struggle beyond festival play.

Five women and a nine-year-old boy live in an isolated house set amid a verdantly hilly landscape. Most are in their 20x or thirties, except for the elderly widow Gjyla (Melihate Qena). At first, and for a long while, it’s unclear why they are here, or what their connection is to each other, other than the mother and son Kumrija (Shengyl Ismaili) and Aga (Arti Lokaj). The only man in sight, Cera (Basri Lushtaku), has been handed a restraining order forbidding him to approach the house, and particularly Luma (Adriana Matoshi) — but his car is never far away.

Aga is a resourceful, likeable boy, who sells cigarettes in town to make money. The women seem to do little other than wash fruit, tell stories and bicker, often violently. The air is turned blue in an endless cycle of exaggerated laughter, furious argument and brief, nonchalant peace.

Emira (Rozafa Çelaj), the youngest, is a beautiful singer but a cruel tease, Luma the one who most frequently takes the bait. Kumrija has told Aga that his father disappeared during the war, and the after-effects of that conflict are still apparent in the collective treatment of Zdenka (Rebeka Qena). The only Croatian amongst the Albanians, she is constantly derided as a Serb and the depressed outsider of the group.

There are glimpses of hardship, most notably when Luma casually recalls how her family exchanged her for a horse. But nothing has the focus, force and devastating reality of the single scene in which Zeqiraj finally reveals their histories, congregating a litany of abuses against women in that region, not least during the war.

But before we reach that point, we have to endure their company which, given its fractiousness, quickly becomes tiresome. Sofian El Fani’s fidgety handheld camerawork really doesn’t help, making the process of trying to follow the already jagged exchanges almost impossible. The whole narrative style feels counter-productive.

Oddly for a film predominantly about women, the scenes between Aga and Cera – particularly when they join forces to take the stricken Zdenka to hospital – prove to be the most engaging, the boy frequently challenging the only father figure around to do the right thing.