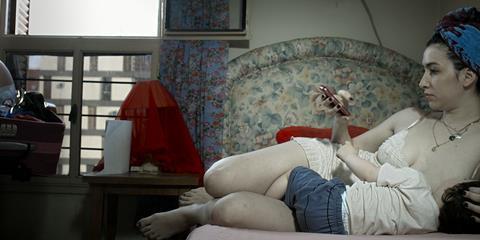 After the dramatic cul de sac of her last feature, the marital drama Aire Libre (2014), Argentina’s Anahì Berneri returns to form with a theme she has already explored, with focus and passion, in Encarnacion (2007) and It’s Your Fault (2010): the way even supposedly illuminated societies withhold sympathy from women who refuse to conform to the good wife or mother role. Though they are very different characters, the eponymous heroines of Alanis and Encarnacion, in particular, share an inner strength and determination to wilfully make their own mistakes that make the two films in some way companion pieces.

There will be an added frisson for Argentinian audiences in the casting of Sofia Gala Castiglione (or Sofia Gala, as she is usually known) in the central role of hooker-with-a-kid Alanis. Gala, the daughter of Moria Casán, a sex comedy star and TV personality of the 1970s and 1980s, has something of a bad-girl Asia Argento image in her native land. But if anything, those associations are likely to be a distraction, as Gala’s feisty, defiant performance her needs no extra-textual support.

The opening shot of 25-year-old Alanis on the toilet, only partly visible at the end of a dingy corridor, sets the dirty realist tone and introduces a running theme, a sense of what might be called aggressive space. Throughout the film, the young sex worker is stymied and frustrated by her physical environment. The apartment that Alanis shares with older prostitute and procuress Gisela (Dana Basso) is a safe haven at first, where, in a striking tableau, she can recline on the bed like the Rokeby Venus after her latest client has left - except that she’s a tattooed Venus who is breastfeeding her sweet but demanding 18-month-year-old son Dante while texting on a pink smartphone.

Soon enough, however, the menace presaged in that opening shot turns real, as two undercover police officers force their way into the flat posing as clients: one of the film’s most powerful shots shows Alanis desperately and vainly trying to keep these invaders out, back against the flimsy door, feet braced against the opposite wall.

With Gisela arrested for people trafficking, Alanis is locked out of the apartment by her landlord and forced out into a Buenos Aires that the director depicts as a hard, ungiving place, where territorial Dominican hookers keep a keen eye out for those, like this penniless young girl from the provinces, who attempt to invade their territory. Alanis takes refuge in a clothes shop run by her aunt Andrea (Silvina Sabater), who sleeps in the back with partner Ramón (Carlos Vulleitch) – so a mattress is laid out for mother and son amidst the trashy frocks and blouses. It’s ironic that, at this moment when Alanis connects with her real family, she’s basically forced to camp out.

On one level the film is a claustrophobic urban chess game in which Alanis is a streetwise pawn, alert to the few spaces she can move into without being attacked. But this is also a story of a mother and child, and the natural rapport between Alanis and Dante (played by Gala’s own son) kicks against the miserabilism into which this Dardenne-ish drama sometimes threatens to sink. In the end, this impressively shot film, full of rich and thoughtful visual and thematic resonance, is let down only by its rather flat dramatic arc, which takes Alanis from one flawed but genuine female support network to another.