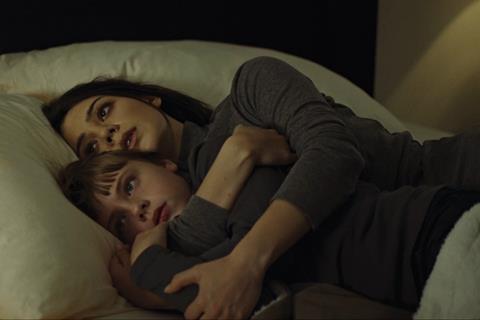 An intriguing idea is stretched rather too thinly in this slight, if stylish, drama from Kazakhstan filmmaker Akan Satayev (Hacker, Rayony), in which a troubled woman and her daughter live an isolated existence in an anonymous city. Alone attempts to meld a horror film sensibility with deep dramatic insight, but ends up buckling under its own metaphorical weight.

Premiering in Busan’s Window On Asian Cinema strand, this is a slim film –a running time of 64 minutes – which is likely to have limited appeal outside of the region’s festival circuit.

Essentially a two-handed chamber piece, Alone plays out within the stark, gleaming confines of a never-identified Eastern European city. A mother (Aissulu Azimbayeva) and her young daughter (Anastasiya Vostrova), also both unnamed, live a solitary existence in a luxurious apartment and, when they venture outside, it seems they are also entirely alone n the world. As they walk around the city, ride the train or play in the playground there is absolutely no sign of people, cars or life, human or animal. Neither seems perturbed by this, or even to notice.

It becomes clear early on that the relationship between mother and child is strained. The girl has a physical intensity that is immediately disconcerting; that, together with her angry delivery of ominous lines like “We’ll always be together, right mummy?”, ratchets up the tension even before the youngster starts talking about (and drawing, in furious strokes) a dark masculine presence that, she says, is trying to separate them.

While Alone succeeds in creating an initially creeping atmosphere, the tense ambiguity is soon undermined by heavy-handed symbolism. As the woman dreams —  of drowning, of dancing, of pregnancy, birth and bloody death —  and her daughter’s behaviour evolves from resentment to violence, even the most casual viewer can guess where this film heading.

The film is visually arresting, shot by Hasan Kydyraliev who turns the vacant city streets into an alien landscape of soaring glass edifices and gleaming stations. Performances are solid if a little overwrought — particularly from Vostrova —  although that’s likely a byproduct of Timur Zhaksylykob’s increasingly strained narrative, which relies on horror film cliche and sweeping gender generalisations