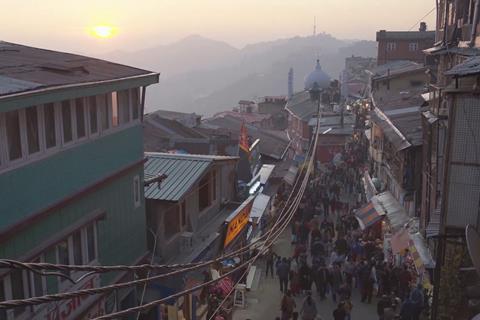 For his debut feature film, writer-director Siddharth Chauhan turns his hometown of Shimla into his muse. But instead of dwelling on the scenic Himalayan vistas which dominate the capital city of the North Indian state of Himachal Pradesh, Chauhan moves his camera inside dilapidated building, known as ‘Amar Colony’, which stands majestically in a chaotic, crowded part of the town. There’s a magnificence in the building’s decay that becomes emblematic of the dissolute lives it houses; it is not just a crumbling backdrop but an unconventional playground for transgressions. And in exploring the interior of the structure, Chauhan also gazes into the minds of its oddball residents.

An original blend of the sacred and the profane

While the essence of Amar Colony is deep-rooted in its specific setting, the film’s human contradictions and dilemmas, along with its aesthetic, have a universal appeal that should see it win further attention following its premiere in Tallinn Black Nights’ First Feature Competition. It will have its Indian premiere at the International Film Festival of Kerala in December.

The narrative, built like a series of vignettes, emerges from the intertwined lives of the building’s residents. The constricting space binds the people together. They are all on a similar quest, to find release for their bottled-up emotions and thwarted passions. Each of the characters is hemmed in and suffocated by their circumstances and relationships, but all try and negotiate their own ways out of the estrangements, ennui, anxieties and boredom.

There is the wheelchair-bound widow Devki (Sangeeta Agrawal) living a joyless life with her young, aimless drifter of a son. Meera (Nimisha Nair) is the bored young housewife, pregnant and perennially waiting for her absent husband. While he is living in a self-created web of secrets and lies, she is seeking to fulfil her desires in ways not quite easily sanctioned by the conservative society which surrounds her. The ageing Durga (Usha Chauhan) and her husband are forced to become the guardians of their young grandson on the death of their son and daughter-in-law, the tragedy strengthening their devotion for the pantheon of Hindu gods as they go on a strange quest for immortality. In this melting pot, a pigeon called Papa, tomatoes, a mannequin and Lord Hanuman’s mace become repositories of immense meaning.

Amar Colony is an original blend of the sacred and the profane, the sensual and the spiritual, and the real, mythological, surreal and the bizarre. Efforts to tie up the various strands do get a little wobbly and muddled towards the end, but the ensemble cast, which features many talented newcomers, keeps the viewer focused. Chauhan regularly breaks the audience’s closeness to his characters by pulling his camera away from their lives, to gaze upon Amar Colony from the outsiside, a distancing measure, while the production design plays with the shabby topography of the building—cooped rooms, narrow and desolate corridors, vacant doors and windows, directionless stairways.

At 75 minutes, Amar Colony makes for an unusually crisp and slender Indian film, but one that makes a profound comment on the human condition.